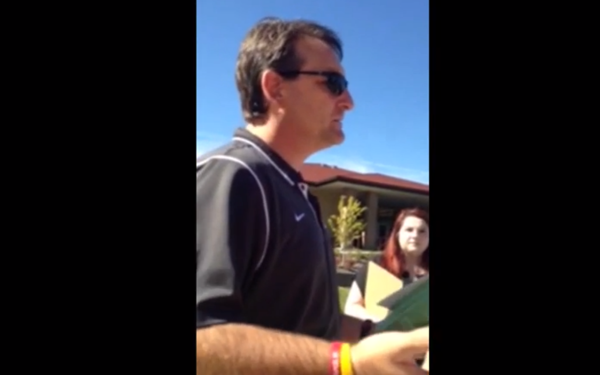 Another college is being accused of violating students' free speech rights.

At Southern Oregon University, four students claim university officials threatened to call the police and take disciplinary action against them after they passed out copies of the U.S. Constitution and advocated against the school's restrictive speech policies (via Fox News).

The students were affiliated with Students for Concealed Carry (a student group that advocates for the right to carry concealed handguns on college campuses) and were reportedly trying to get students to support their initiative to end the college's "free speech zone." A "free speech zone" is a designated area where students can protest, and according to Campus Reform, this area totals less than one percent of the campus.

After viewing an exclusive video that Campus Reform obtained of the student demonstrators talking to university officials, the students were passing out the free Constitutions near a residential area, not a "free speech zone."

Stephanie Keaveney, a member of the SCC, told FoxNews.com, “First, campus public security told us we needed to move our activities to the free speech zone. Then, security told us they were going to call the Ashland Police Department and let the administration know we were refusing to leave.”

She added, "Every person we talked to agreed with us that this is a free speech issue. What the university was doing is unconstitutional.”

Keaveney also told Campus Reform, "Administrators accused us of causing an immediate panic for the safety of students in the face of gun violence, or the promotion of such.”

However, an official says on the video that the student demonstrators were making another student feel uncomfortable and that they received a complaint. SOU's Head of Community and Media relations said to FoxNews.com, “[The students] were not forced to move to the free speech zone, nor were they prevented from continuing to hand out their literature."

SOU also confirmed with Campus Reform that the students will not be disciplined.

Colleges' "free speech zones" and restrictive speech policies have sparked debates at multiple campuses. At Citrus College in Glendora, Calif., for example, one student filed a lawsuit against the school after an official allegedly stopped him from speaking about his campaign in a non-free speech zone. His lawsuit claimed these zones were unconstitutional.