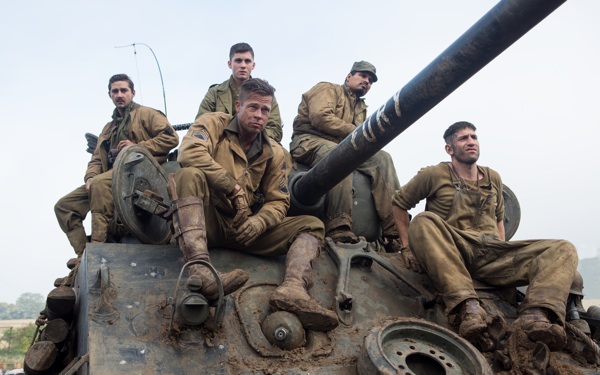 Brad Pitt is killin’ Nazis….again. Pitt’s character, Don “Wardaddy” Collier, has all the swagger of  Lt. Aldo Raine (Pitt’s character in Inglourious Basterds), but with better scars and a less believable haircut.

Perhaps this is the reason why some wrote off Fury as an over-dramatized, shoot-em-up flick, marrying the legacy of The Greatest Generation with all the class and dignity of a gangster movie. In short: their expectations on David Ayer’s take on WWII were not high. You want to expect a lot from this movie, but your expectations are set low because it seems like a strange fit to have the End of Watch director tell a story from the same era as Tora! Tora! Tora!

So, you can imagine my relief when the film actually proved to be very entertaining. This isn’t the next Saving Private Ryan, and we shouldn’t expect any Oscar buzz, but Fury is still nonetheless exciting, imaginative and enjoyable.

This film’s strength lies in its visual presentation. Much of the general public have never seen Americans fighting in tanks in WWII, simply because there was never the technology to accurately portray a tank fight. But, Ayer’s film captures the remarkable innovation, the horrifying power of these early machines of modern warfare. Screaming streaks of green light ricochet, miss or explode on their targets, punctuating the film's awe-inspiring and informative battle scenes. It’s interesting to see such a vivid portrayal of this type of warfare that we civilians will thankfully never experience in person.

With that all being said, there are definitely some visuals that come off as hyperbole; a few death sequences seem a bit comic book-y.

Aside from its visual presentation, Fury’s most effective aspect is its sheer grittiness. As a showered, comfortably dressed theatergoer, you’re made to feel like part of infantry. The depiction of the tank that Collier and his men call home is ruthlessly detailed with all of the blood, sweat, tears, human waste and loose body parts that come with war. The film’s opening sequence is vivid enough to be gag-worthy, which is most definitely the point. These tank operators were the antithesis of clean, “glamorous” being a word they could hardly pronounce.

Fury’s unabashed representation of the battlefield, realistic depiction of Germany’s total war effort in the last throes of WWII and the characters’ psyches honor the lives of those who were involved in this dark period in history. The film tells an engaging war story, with so much detail it’s almost hard to digest.

This isn’t the deepest movie to come out this year, but Fury is definitely enjoyable and visually shocking enough that you’ll be having flashbacks for weeks.