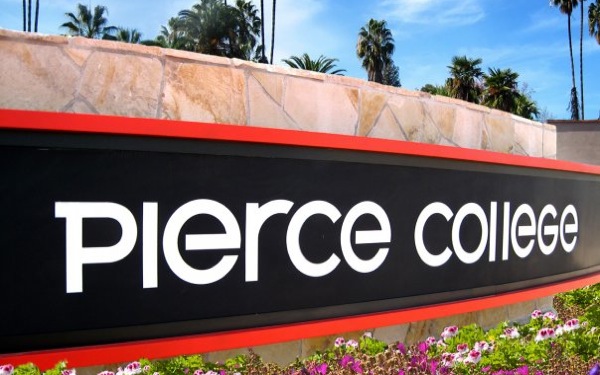 WOODLAND HILLS -- A former Pierce College student was arrested Thursday after allegedly posting threatening photos of guns on his Facebook page and warning students not to come to campus that day, authorities said.

The 26-year-old Northridge man was taken into custody before noon at his workplace after the campus had been evacuated and closed to students around 8 a.m., said Los Angeles County sheriff’s Capt. Cheryl Newman-Tarwater of the department’s community college bureau.

The suspect was identified as Sergio Castanon Jr. An assault-style rifle, a 45-caliber handgun and multiple rounds for both weapons were recovered from the bedroom of his Northridge home, where he lived with his parents. In addition, an extended-capacity magazine and .223 rounds for the rifle as well as hollow-point rounds for the 45-caliber weapon were recovered, Newman-Tarwater said.

Castanon was booked at the Sheriff’s Lost Hills Station for criminal threats, possession of high capacity magazines and illegal ammunition. He is being held on $50,000 bail, officials said.

The threat posted on the suspect’s Facebook page included photos depicting an assault rifle and another smaller-caliber weapon and warning students not to come to the Pierce campus on Thursday, Newman-Tarwater said.

Those weapons were registered to the suspect and are consistent with what officials saw on his Facebook page, said Newman-Tarwater. The suspect did not name specific individuals as targets, she said.

“I would characterize (the threat) as very, very concerning — high-risk based on what we saw,” she told reporters in a campus parking lot Thursday.

“I can tell you the campus was 100 percent safe. He was not around the corner (when he was taken into custody).”

The Los Angeles Police Department and Pierce College sheriff’s office were both first alerted to the threat Wednesday night. Officials worked on the case “through the night,” she said, and developed enough information to determine a crime had occurred.

“It was through the partnership with the campus, the Los Angeles Police Department — the CHP was here, multiple units from the sheriff’s department,” she said. “Because of that collective action, the suspect is now in custody.”

School officials made the decision to shut down classes and evacuate the campus after evaluating the threat, said college President Kathleen Burke.

“When we get the call, we make the decision whether or not to lock the campus down or evacuate,” she said. “In this particular circumstance, we thought it was in the best interest for the safety of our student and employees to evacuate the campus to allow the investigation to take place.”

Burke said the campus was scheduled to reopen Thursday afternoon in time for 3:30 p.m. classes.

“We now know that the campus is safe, and we will be reopening for late afternoon and evening classes,” Burke said. “If they have a class that begins after 3 p.m., they should return to campus.”

In the confusion that followed the school shutdown, reports surfaced that a gunman had been seen on campus, but L.A. County Sheriff’s Deputy Tony Moore said those reports were untrue.

The shutdown and evacuation of the campus in the 6200 block of Winnetka Avenue began about 8 a.m., sheriff’s department officials said.

Los Angeles firefighters and paramedics were at the college as a precaution, said LAFD spokesman Erik Scott.

It serves more than 21,000 students, according to the school. The campus, opened in 1947, covers about 426 acres in the western San Fernando Valley.