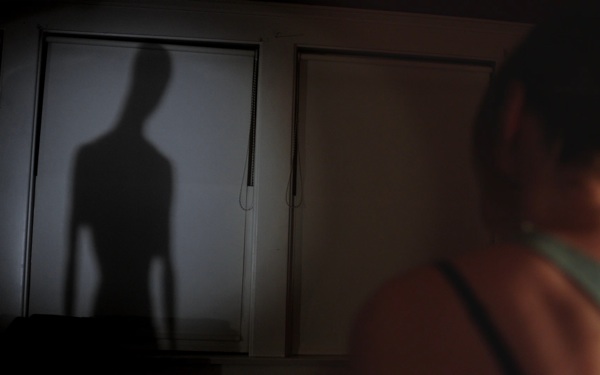 You know that feeling you experience when you wake up from a nightmare? It’s almost as if the line separating your conscious self from the anxiety of your dreams has altogether disappeared, and you find yourself teetering on a nonexistent edge as the nightmare teases to consume you. For most of us, this feeling goes as quickly as it came. For June Abbott, it’s merely the beginning.

In the sequel to 2012’s The Pact, we meet a new leading lady, but she may have brought some familiar ghostly faces along with her. June is a strange young woman who works as a crime scene cleaner and spends her free time sketching eerily morbid pictures while her doe-eyed boyfriend looks on concerned. Whereas most sane people would shy away from brain residue on the wall, June (Camilla Luddington, “Grey’s Anatomy”) prefers to pick at it curiously, slowly absorbing the reason it is there. But everything changes when FBI Agent Ballard (Patrick Fischler, Speed) shows up at her doorstep and reveals that the serial killer who murdered her biological mother years ago—and who was believed to be caught—may actually still be on the loose…and June might be his next target.

The serial killer in The Pact 2 is none other than the same Judas who wreaked havoc in the previous film, killing numerous innocent women and who apparently still has an insatiable craving to murder more. This time around, however, we find our new star has a biological tie to the Judas killer, one that complicates how June must go about stopping anyone else from dying, especially as he slowly creeps into her dreams and skews her idea of reality.

From there, it’s a hard plot to summarize, not only because of the spoilers that may slip, but also because it quite frankly was hard to understand exactly what was going on.

Writer/directors Dallas Richard Hallam and Patrick Horvath helmed a messy half-spiritual, half-real life horror rolled into one. Dissecting elements from the original film, which they did not direct, they aimed to extrapolate an even more intent-driven storyline, which is commendable. Unfortunately, it ended up being far more than they could chew.

Similar to the Final Destination series, characters were brought in from the previous film to help out the new characters with the same undying problems. Annie (Caity Lotz), who thought she had killed Judas at the end of the last movie, now has to deal with him all over again in a much more…spiritual way. But unlike the Final Destination series, where those old characters actually had some helpful information or at least insight, Annie merely acts as a foil to appeal to the somewhat wandering plot.

Luddington still proves to do well in front of the camera as a woman torn between the atrocities of the real world and whatever it is that lies on the other side. Hallam and Horvath do procure some real moments of scare, giving Luddington brief opportunities to shine, but these aren’t enough for her to carry the weight of the rest of the film and the rest of the rather lackluster cast. From June's dopey cop boyfriend (Scott Michael Foster, “Greek”), who might have a few tricks up his sleeve, to creepy Agent Ballard, the characters and actors simultaneously feel contrived and underdone. This echoes much of the spirit of The Pact 2, where great heights are set, but the reach is far too short.