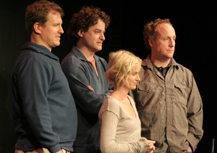 Let’s face it, improv comedy shows can be really, really good or really, really bad. There’s not much room in the middle. The moments leading up to the start of a show can have you wondering how painful or pleasurable it will be to watch.

And many of the theatres don’t serve alcohol, which only works against them. This, however, is not true for the Upright Citizens Brigade Theatre (UCBT) in Hollywood. The shows dish out big laughs and deep belly aches without the need for any controlled substances.

The UCBT troupe was started in New York by founders Matt Besser, Amy Poehler, Ian Roberts and Matt Walsh. Although the UCB has only been gracing Los Angeles with its presence for about six months, it has already become an underground hit with the young, hip collegiate crowd.

Seven nights a week Franklin Avenue floods with a Disneyland-esque line trailing down the block. Patrons, typically eager to see favorites Matt Besser, Ian Roberts and Matt Walsh, are just as excited about the celebrity guest comedians, which include the likes of Sarah Silverman and David Cross.

The price couldn’t be more right at the UCBT with admission ranging from free to $8. And the entertainment provided over the hour and a half show is priceless. One of the UCB’s most talked about shows is the weekly "Asssscat" improv show.

While many improv shows can have you fidgeting uncomfortably in your seat as the comedians painfully sweat through a mind blank, the "Asssscat" show is amazingly fast-paced and, most importantly, genuinely funny.

The guest host performs a short monologue and the seven remaining comedians use material from that monologue to construct the remainder of the show. This way, even if the monologue sucks (it did have just a couple of lulls), the other comedians can use the flat jokes to make fun of the guest host.

And don’t think for one second that you are safe from being the center of cruel jokes just because you are sitting in the audience. Their advice: Don’t be stupid and sit in the front row if you don’t want to get picked on.

The comedians in "Asssscat" excel at tearing apart the monologue in the improvised sketches and then slowly piecing it back together, successfully coming to some sort of climax towards the end of each segment that involves the whole cast. Impressive recall of the smallest details in the monologue is a specialty demonstrated by most of the performers.

The one thing the show was lacking was a female comedian. Although the men took turns playing "the woman" in sketches that required it, the skits would have been more effective and well-rounded with at least one good female performer. Where is Amy Poehler when you need her?

In addition to the more than 20 performances a week, UCBT also offers classes taught by professional comedians. In its short Los Angeles existence, UCBT is already one of the city’s largest improv training centers, steadily maintaining more than 500 students at any given time.

What it all boils down to is that you can’t beat a highly entertaining and just plain fun night out in Los Angeles for the price of a UCBT show ticket. The comedians (notably Besser, Roberts and Walsh) are excellent and talented and put on a pretty amazing improv show.