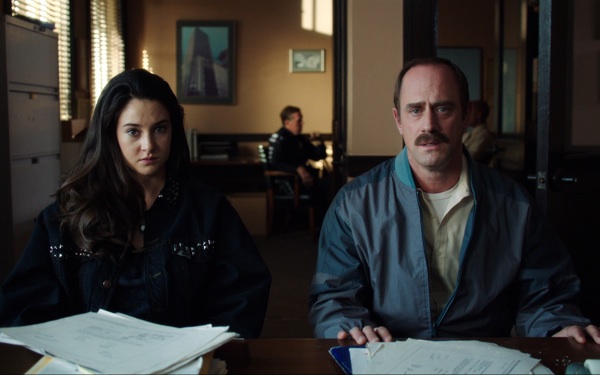 From fighting the most heinous crimes on “Law & Order: SVU” to weight-training with the vice president in “Veep,” Christopher Meloni has covered a wide platform of roles in his career where neither drama nor comedy can seem to hold him back. Who can really forget the dear cult hit Wet Hot American Summer (2001) and the genius of Meloni’s bantering with a can of soup? I can’t and never will.

Now we get to see him in director Gregg Araki’s (Mysterious Skin, Kaboom) visually pulsing adaptation of Laura Kasischke’s acclaimed novel White Bird in a Blizzard. Taking us back to the hazy aesthetics of the late ‘80s, Araki introduces a teenage girl named Kat (Shailene Woodley, Divergent) as she starts to wade through the precarious waters of burgeoning sexuality and adulthood. But, when her archetypical housewife of a mother (Eva Green, Casino Royale) seems to slip into madness and suddenly disappears, Kat must determine if and how it affects her adolescence.

As Kat’s cringingly awkward father Brock, Meloni embraces the secret horrors of “The American Dream” as his wife, child and his boring life all become a mysterious source of unhappiness. If the cookie-cutter house with a cookie-cutter family living inside doesn’t bring the joy that we were all promised, then how do we escape it?

Sitting down and chatting with Meloni, we find out that sometimes the key to happiness is acknowledging that you’re unhappy.

Campus Circle: First and foremost, did you read the book?
Christopher Meloni: No.

So did Gregg Araki talk to you about what he got from the book and how he wanted to incorporate its themes and aesthetics?
No. Really, his interpretation of that book and that script—it was very clear to me. That’s one of the reasons why I didn’t read the book. I didn’t want to confuse imageries. I didn’t want two different movies running in my head. I wanted it to feel like the guy who wrote this is the guy who’s directing this, and I understood it in my way. When I met with Gregg, I told him how I saw what he had written, how I saw Brock, what moved me, the dynamics of the family and the operating systems that everyone was moving under. He agreed, I guess, and then I was hired.

In terms of shooting, what is his style like? Is he very hands-on, or does he let you bring your own interpretation?
It’s funny; he’s a silent ninja. I don’t know how he does it. You have a very clear idea of what he wants without being dictatorial or getting in your soup bowl or anything. You just get it, and everyone’s on the same page. That’s a real skill, and I don’t know how he manages to do that, but he manages the set very well. He’s very calm and very clear.

And I imagine there had to be inspiration from the set itself with [Araki’s] unique visual style?
I think you just helped me answer that question. All the actors are very smart, and I know they all knew Greg’s work. So, number one: You have a sense of how he shoots and what kind of storyteller he is. Then, you walk on the set, and you see what production design has done, and you’re aware of the shots he’s setting up. You get a very good sense of what the tableau is that you’re in.

You become a part of the mold.
Exactly. It’s almost as if you’re one of the dolls in the dollhouse.

Since your and Eva Green’s relationship in the film was so important, how did you prepare for that?
When the cameras weren’t rolling, she was so quietly and subtly funny. And I wouldn’t be able to tell you why. It was just sort of a behavioral tick. It drew me to her. But then we’d do a scene, and we’d be disconnected. It was simply because the work I’ve done, how I interpreted our relationship and how she interpreted our relationship—it was the same. These two moons that were inextricably drawn to each other’s orbit, but never touch, and it made me sad.

Sounds like the perfect emotion to feed off of for that particular relationship.
Exactly! So it was fantastic! It made it effortless. It made these two people who, when you cut, got along great in our little nice beautiful dance, then all of the sudden, it was two people who can’t f***ing connect.

Just like marriage. No matter if there’s love anymore or not, their past creates a connection that becomes hard to let go of. You can’t really truly break apart.
It was perfect.

With Brock, he does a terrible thing, but I don’t necessarily think of him as a villain. I think both him and Eve are products of the same problem, this notion of “The American Dream” that put people into these roles. Where Eve is more in the spotlight as the main victim of this idea, in reality so is Brock. Did you ever consider him a villain?
Never. I thought of him as the loneliest man in the world, not knowing that he was lonely. I think that’s one of the saddest conditions to go through life with, because he keeps clinging to that image of the road sign on the side of the road, where the family of four is like [cheesy grin], “America by Americans!” Everyone’s happy because America is always happy. He doesn’t have any tools to dig deep and find out what makes him unhappy, to dig into reality and past the façade.

I think most people will simply focus on her as the victim and leave you behind, where I think you’re both equally reacting—albeit very differently— to this grand oppressing idea of what America should be.
She’s the one person who keeps getting these signals in her brain, almost like Jim Carrey in The Truman Show (1998), where he suspects it’s all fake. So she’s the one who’s crazy, because she’s the one who’s unhappy and doesn’t have the words or doesn’t know how to get out of this perfect dream that she’s made for herself. She’s the one that’s labeled as crazy.

Enter to win a FREE White Bird in a Blizzard poster by clicking here!