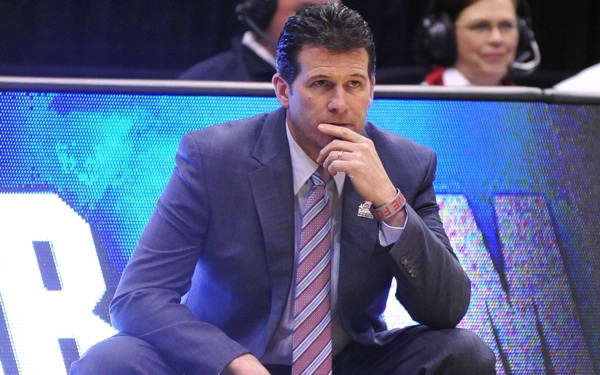 Alford structures the preseason in three phases. The first days are training camp. Then there's a team retreat, a trip to San Diego last weekend. Only then do true practices begin.

This setup allows the freshmen to breathe for a weekend and start over. Often, Alford said the young players struggle to adapt to the pace of play, physicality or even something as small as the shot clock.

This year, with five freshmen, the learning curve is especially steep. On Tuesday, Alford praised the team's work ethic and talent, but said "it's inexperienced."

"That inexperience I think is going to take us a little bit longer," he said.

Some of those freshmen are expected to play significant minutes, and they'll be thrust into an unforgiving nonconference slate. The early-season success may depend on how quickly they can adapt.

The biggest upside belongs to Kevon Looney, the 6-foot-9 forward-guard from Wisconsin. But Looney hasn't been at full strength since the preseason began. He has a bruised hip, and as a precaution the team has worked him in gradually.

Looney can add a different dimension to the offense, especially in the transition game. He is a skilled rebounder and Alford has given him the freedom to push the ball to start the offense.

"You just get a little bit more versatile when Kevon's in there because he can play multiple positions," Alford said.

Looney's injury is more painful than anything, and the coach said it won't affect how he uses the freshman.

Alford described Looney as a "big guard." That will allow UCLA to put four guards on the court, as they did at times last season, even though the backcourt depth is thin.

"I think he's going to be versatile that way," Alford said. "But, he's a freshman. ... I think you'll see a gradual transformation of who he is as a player."

Still in the zone

Last season, UCLA tied for first in the conference with 81.8 points per game, but its defense was eighth in points against, with 70.4.

In particular, its zone defense, which Alford used on roughly a third of possessions, was an issue. Teams found space on the perimeter to shoot three-point shots.

"Last year we were so good on offense that we'd take possessions off on defense," Bryce Alford said. "I think a lot of times when we switched from man to zone, we got the tendency to relax a little bit."

Senior guard Norman Powell said that the problem had to do with rebounding and spacing.

"A lot of times we were out of position," Powell said.

Defense has been the focus in the first few practices, Bryce Alford said. He expects this team to be better because their length makes the zone more imposing.

Alford, the coach, said he expects a similar proportion of zone defense this season. Even though the zone sometimes created problems on the defensive end, the offense performed better when coming out of the zone.

Dribble for the Cure

The team will participate Sunday in the seventh annual Dribble for the Cure.

The event was founded in part by John Vallely, who won national championships under John Wooden in 1969 and 1970. Vallely is a two-time stem cell transplant cancer survivor whose daughter, Erin, died of cancer at 12 in 1991. In the first six years, the fundraiser has brought in nearly $700,000 for pediatric cancer patients at Mattel Children's Hospital.

Registration starts at 8:30 a.m. and the 1.2-mile dribble begins at 10:15 a.m. Participants will have a chance to meet UCLA athletes and coaches at the finish line.