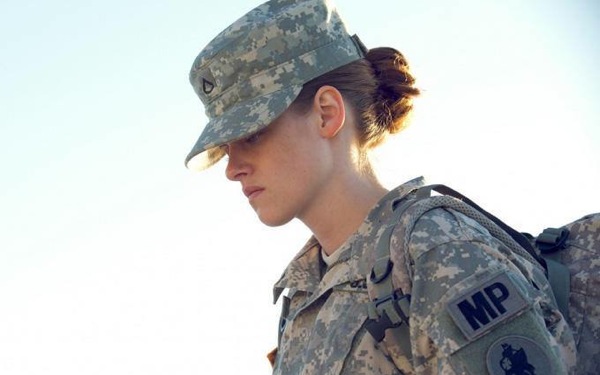 Kristen Stewart plays a 'Gitmo' soldier in the indie darling.

Much respect for Kristen Stewart, the Twilight star who could have contented herself with Snow White films or globe trotting, nibbling on bonbons and dating the rich and the beautiful for the rest of her life.

Instead, she’s doing daring indie fare like Camp X-Ray, an inside Guantanamo melodrama about a soldier, an Islamic inmate and the claustrophobic space they share, isolated from the world at America’s military prison for “enemy noncombatants.”

For Private Cole (Stewart), the first day at “Gitmo” is a chance to prove she belongs, to fit in with the men. It’s not combat duty, her comrades reassure each other. Left unsaid is the stress, boredom and the psychological toll this prison guard job takes.

The various Muslim men in her block are “detainees, NOT ‘prisoners of war.’” That distinction lingers, the U.S. government’s way of avoiding the Geneva Convention terms on treatment of prisoners of war. So uncooperative detainees can be sleep deprived, an exquisitely civilized form of torture.

The soldiers are not there to prevent escapes. Where could they go?

“You are here to prevent them from dying.”

Suicide watch, lights on 24 hours a day, daily exercise outside in a tiny cage. If these men weren’t wild-eyed, bearded caricatures of terrorists when they were captured, they certainly are now.

“They will test you and they will BEST you,” thick-necked Corporal Ransdell (Lane Garrison) barks. The prisoners stay put, know the routine and vent their rage at their captors in the few ways open to them. Because the soldiers are rotated through frequently, contact is limited. Their maddening duty only lasts for short stretches.

Cole is small-boned, thin, sensitive and over-matched. Within minutes, she has a bloody lip. Within hours, she has feces flung on her. She won’t let them beat her.

But one prisoner, number 471, named “Ali” is on her case. He has a beef with the prison library.

“I think you guys don’t have the last Harry Potter book ON PURPOSE!” he fumes. Their trick won’t work. “I am NOT going crazy!”

Cole sticks her head in windows every three minutes, making her circuit, and with each glance, this woman staring at them humiliates the Muslim men. But Ali (Peyman Moaadi, riveting to watch) tries to engage her. Where is she from? What is her name (name tags are removed on the block)?

“Who is this Hannibal Lecter?”

The novelty is the inside view of this prison and Sattler’s ability to take us there and make us appreciate this sort of isolated incarceration. Limited human contact, sensory deprivation, media deprivation and no hope for this ever changing would drive anyone mad.

And the ever-engaging Stewart, by her presence, got the movie made and builds empathy, both for the soldiers doing this thankless job, and the detainees, who don’t even have the hope of a quick death as an escape.

Written and directed by Peter Sattler. An IFC release.