For Jillian Banks, Music is a Major ‘Exhale’ 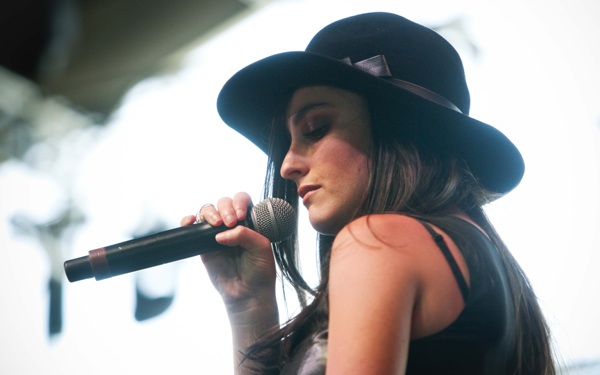 Jillian Banks, the 26-year-old singer-songwriter whose nakedly confessional music has earned her sold-out shows and accolades, is struggling to describe one of her songs.

At the Hollywood studio of one of her producers, she’s attempting to talk about “Change,” a song in which a woman desperately makes excuses for the boyfriend she knows is abusive. It’s bleak — the R&B tune as a work of stream-of-consciousness anxiety. Occasionally, Banks’ voice is scratched with static, and the closely cropped, digitally enhanced instrumentation heightens the claustrophobia.

So she gives up, and after a long pause, the artist, curled up on a couch, simply starts singing.

“Always cold while you’d self-incriminate by avoiding all my questions and calling me an instigator,” the song goes, Banks’ speak-sing voice far less husky and threatening than her stage-sing voice. “Cut me down.”

Banks, who records and performs under only her last name, has been something of a mystery. She arrived seemingly out of nowhere (actually, Tarzana) and largely sold out her first major headlining tour weeks before her debut album, Goddess, was released in September by the Capitol Music Group’s Harvest Records. Her songs are alternately sultry and manic — piano-based ballads often remade with patient and foreboding electronics.

A former psychology student at USC, Banks for the most part detests social media. Twitter, she says, makes her “uncomfortable.” She prefers that fans simply text her (she has more than one number). She is also wary of the news media. Although she is open about her emotional struggles, including the divorce of her parents, she expresses dismay that journalists keep citing them as catalysts for her music.

She makes clear that it’s more complex, describing her earlier self as a teenage loner who went to school and then locked herself in her bedroom to teach herself music on a toy keyboard.

“I felt way down,” she says of her teenage years. “I felt very sad and very angry. I didn’t know how to express it, who to talk to. I felt like a mute. I felt helpless. I felt crazy. I wanted to shake everyone. I would try to talk about what I was feeling, but no one would get it.”

This is the point where Banks leans back and lets out a sigh that sounds partly like a scream.

“Like that? That sigh. That’s what I felt like,” she says. “I had too many words to say, and I didn’t know how to say them.”

Music, she says, was “the major exhale.”

In interviews, she’s frank and distant, albeit colorfully so, and if not quite shy, she’s deliberate with her words. Although one would never guess by the way she commandingly saunters around the stage, she was once reticent to share her music. Her career didn’t begin until a friend, against Banks’ wishes, started submitting her songs to prospective managers.

She’s represented by the well-connected Trevor McFedries, a DJ and producer who’s toured with Katy Perry, and for Banks, the last two years have been a rush of experimentation and opportunities. She’s had a song appear in the film Divergent, as well as in a commercial for lingerie, and she’s toured with the Weeknd, whose scorched-earth R&B hits a similar vibe.

“She’s a pop artist but a very left of center one, with darkness and intrigue,” says Piero Giramonti, general manager of Harvest Records. “When she started making music, it was her sitting at a piano and making melodies. As it evolved, it was experimenting with production.”

Banks is at once flowery (describing a female fan she met on tour as a “beautiful little fairy”) and cutthroat (swearing, raising her voice and swiping her hand at the couch while slamming people “who have walls up” when it comes to romance). The contrast manifests itself in songs that play with extremes.

There’s the delicate and reassuring sadness that’s at the core of the acoustic soul of “Someone New,” and then there’s the feverish “Stick,” where lust is a paralyzing agent amid synths that scrape and scrap as if trying to set the song aflame.

When Banks’ music first started reaching the public, the artist had no social media presence. She didn’t want one. Instead, she posted her cell number online.

“Most of them are really wonderful and just saying how much they connect to the music. People open up so much because it’s not public,” she says. “It’s not Twitter, so people feel like they could tell me really personal, amazing things. I think it’s really special. I see no reason why I should ever stop doing it.”

She is comfortable acting as a sort of spiritual advisor to fans — or even a reporter. During an interview, she is her most casual when giving dating advice. It is relatively easy to open to her. There’s an intimacy in her music — a closeness that probes deeper than a peek into someone’s diary, a nearness that results from hearing every quake of her vocals.

Producer and regular collaborator Tim Anderson, a former member of local dance-rock band Ima Robot and the man who introduced Banks to Harvest, recalls not being immediately “blown away” when he first watched Banks perform an early verse and chorus in his studio. The appeal was more subtle. “I was just wrapped up in it,” he says.

“I was engaged and wanted to keep working with her,” Anderson says.

So when it comes to affairs of the heart, one is inclined to trust Banks when she tells you your date is going to lead to a “good thing.”

It’s suggested that some of her songs, such as the aggressive “Brain” and the serpentine “This Is What It Feels Like,” frame courtship as a game in which everyone is overthinking and the person who reveals the most loses.

Best, perhaps, to expose nothing?

“Don’t do that,” she says, waving her hand before saying two words that get to the heart of “Goddess.” There’s torment, sure, but first and foremost it’s a record simply about feeling.