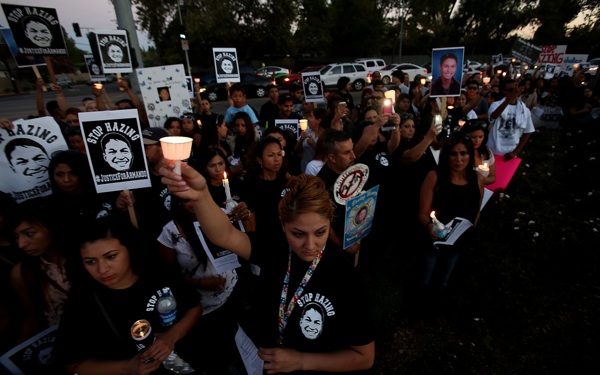 Family and friends of Armando Villa hold up candles and placards during a rally.
(Credit: Luis Sinco/Los Angeles Times/MCT)

According to the paper, all sororities and fraternities received a letter Thursday from the vice president of student affairs, stating that the Pi Kappa Alpha has been placed on interim suspension and all pledging activities at all Greek organizations must "cease and desist."

"The university does not object to the induction of pledges, but they shall not be made subject to further pledge activity," read the letter.

This news comes after CSUN student Armando Villa died over the summer while pledging Pi Kappa Phi. The 19-year-old was found barefoot, with blisters and no water, in a ditch in the Angeles National Forest after going on a pledge hike. He died on July 1.

The university shut down the fraternity in September after an independent investigation found Villa had been hazed. The Los Angeles Sheriff’s Department is expected to release its investigation to the Los Angeles District Attorney’s Office next week.

One student in a sorority told the paper, "I think that it’s a shame that there’s hazing at CSUN, because it’s not present in every organization at CSUN. And for those who are against hazing, that is really sad that our chapters are going to unfortunately not going to keep going as well."

She continued, "I think that they need to be held accountable, but it shouldn’t reflect on the entire Greek system."