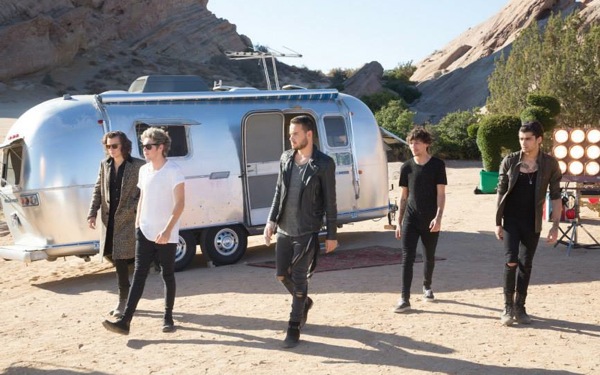 One Direction's music video for "Steal My Girl" finally released Friday—and it makes hanging out in a barren desert actually look like a hell of a good time.

In the video, the boys of 1D arrive on set at a hot and arid dryland where they meet their music video director, the hilarious Danny DeVito ("It's Always Sunny in Philadelphia," Matilda). While singing about how amazing, beautiful and desirable their girl is, each of the bandmembers have fun interacting with a bunch of random people and animals: ballerinas, sumo wrestlers, a marching band and a chimpanzee, just to name of few.

Although the video will surely bring smiles to their fans' faces, PETA is not amused. The band said no animals were hurt in the making of the "Steal My Girl" video, but when the animal rights group realized (through behind-the-scenes photos) that the band used Steve Martin's Working Wildlife, it urged 1D to delete the scenes that contain the chimp. According to the The Mirror, PETA alleges the company is "renowned for mistreating" animals and accused it of locking monkeys in dark, cramp cages for 18 hours and not feeding them properly.

Owner Steve Martin defended his company in a written statement, claiming, "We train all our animals with a very positive, reward based concept. We are also in excellent standing with The American Humane Society and have never been cited for mistreating our animals."

The chimp/PETA drama aside, the video is still a fun treat. Not as yummy as this sexy fan faction, but still tasty nonetheless.

Watch One Direction's "Steal My Girl" video above!