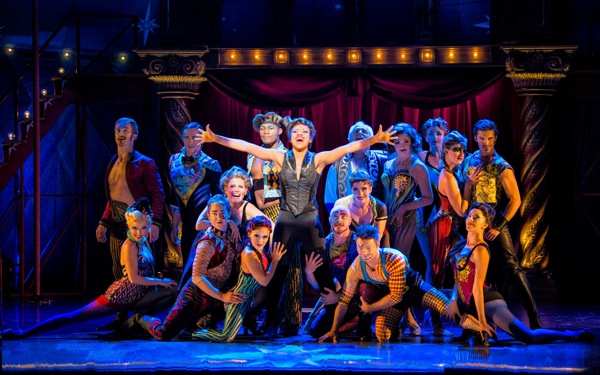 As college students, we are all too familiar with trying to find our identity and our purpose in life. This journey can be difficult and heart wrenching, but can it also include pivotal points that give us satisfaction with what we have. This is precisely what the Tony-Award winning musical “Pippin” deals with.

In this coming-of-age comedy, Pippin (played by Matthew James Thomas) is a prince trying to find his “Corner of the Sky.” The play starts off with Pippin arriving back at his father’s, Charlemagne (John Rubinstein, the original Pippin), castle after years spent away studying. Upon his return, Pippin expresses the need to feel fulfillment in his life, to have something more than books to live for. This then begins his journey to self-discovery.

His journey begins with his fantasy of glory as he joins the battle against the Visigoths, never having trained nor fought before. When this ends in disillusion, he turns to his grandmother, Berthe (played by the extraordinary two-time Emmy and two-time Tony winner Andrea Martin). From her, he gets some sage advice and the journey continues on, with Pippin still struggling to find fulfillment. Although of course, eventually he does.

“Pippin” is filled with many comedic moments and is presented in a way where the fourth wall is broken. The performers, particularly leading player Sasha Allen, talk to the audience.

Speaking of the performers, they’re highly skilled acrobats. What makes this play stand out among others, aside from its compelling storyline and the various ha-ha moments, are its many stunts. Essentially, “Pippin” is a musical and a circus rolled up into one. From acrobats hanging horizontally on vertical poles to flying through hoops, this show is certainly not lacking on its “wow” factor. It certainly made my sister and me sit at the edge of our seat in awe and admiration. And yet, all of the circus stunts didn’t detract from the overall musical. Instead, it enhanced it. We were most impressed by Martin’s number, where she dangled from a trapeze as if it were just an ordinary day.

The quick wardrobe changes that appeared to happen in the blink of an eye were also very impressive. If you aren’t paying attention, you might even miss them. But of course, you will pay attention to this visually satisfying play.

With a strong plot, great acting and equally amazing stunts, “Pippin” is a play just about everyone can enjoy. It is truly magical.