Synthpop Duo Erasure Throws Back to the '80s During Palladium Performance 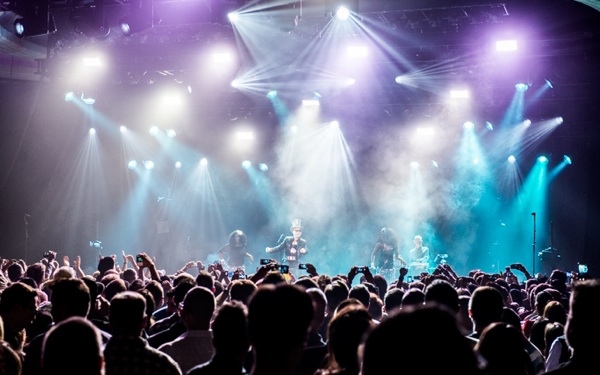 With the light show and song choice, Erasure's show as like a flashback to the '80s.
(Credit: Tamea Agle)

It was a very festive evening at the Hollywood Palladium on Friday. In fact, it felt like Las Vegas made its way to the city that night, as two unicorns and a man in a full body sequined outfit stood excitedly in the front row. They, along with most of the crowd, were there for duo Erasure (consisting of vocalist Andy Bell and keyboardist Vince Clarke), who is on tour for its recently released album The Violet Flame.

But first, the opening act performed. Pop band Superhumanoids had many people singing along when they hit the stage to warm up the crowd. Though they were not quite as festive as the headliners, they had many fans in the audience and put on a great show at their first turn at the Palladium. They were very quick to express their excitement at playing the venue. The local Los Angeles band had success with last year’s debut LP Exhibitionists and this summer’s Come Say Hello/Hey Big Bang. The Superhumanoid’s opening performance was a great start to the night, setting the tone for the rest of the evening.

When Erasure took to the stage, hands went up, cell phones were flashing away, and the crowd went wild. Dressed in a glittering sequined jacket, pants and matching top hat and backed by equally dazzling female dancers/singers, Bell danced eccentrically as he launched into songs from the ‘80s, such as “Oh L’amour,” “Star,” “Blue Savannah” and “A Little Respect,” with the audience singing back enthusiastically. But of course, the duo also performed songs from its recent album, including “Elevation.”

The Violet Flame tour will continue with dates overseas in November and some nights to close out the year in New York. If you're going to be in New York for the New Year, I would strongly suggest ringing in 2015 with Erasure. Few parties will be more elaborate.