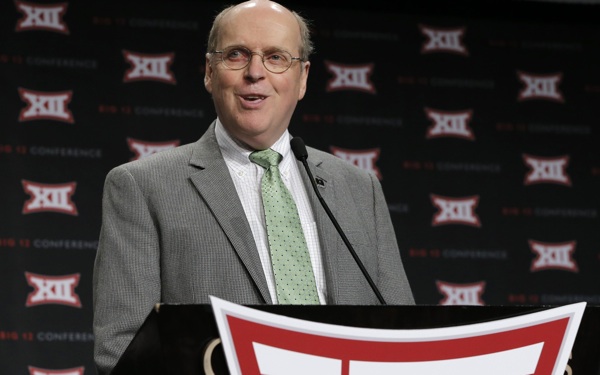 Members of the selection committee seeding this year’s four-team playoff bracket meet Monday and Tuesday in Grapevine. After Tuesday’s session, the first set of weekly CFP rankings will be released, giving fans their first glimpse of how this 12-member panel will untangle a 15-school knot of one-loss teams with viable playoff hopes.

That 15-team logjam probably includes at least two participants in the four-team playoff bracket that will be finalized Dec. 7. So Tuesday’s CFP pecking order, when it is unveiled, means a lot to No. 10 TCU (6-1), No. 11 Kansas State (6-1) and No. 12 Baylor (6-1), the three highest-ranked teams from the Big 12 in Sunday’s Associated Press poll.

Not included in the mega-tie are the nation’s final three undefeated FBS teams: No. 1 Mississippi State (7-0) and No. 2 Florida State (7-0), the clear playoff frontrunners, and No. 23 Marshall (8-0), which will need an act of Congress to surface on the committee’s radar screen because it does not play in a Power 5 conference.

On the surface, separating more than a dozen comparable teams for playoff purposes sounds impossible. From the inside, it’s even more challenging.

CFP committee members let 17 selected media members test-drive the process during a recent mock bracket exercise. As one of the participants, I can assure you the six-hour deliberations involved disagreements, discussions and statistical challenges to preconceived notions.

And we were only creating a mock playoff bracket for teams from the 2008 season. CFP officials wanted the media panel to work with a full season’s worth of data, including established conference champions, because that is what their selection committee will do in December.

Naturally, they chose the most controversial season from the BCS era. It included a three-way tie among teams with 11-1 records for the Big 12 South Division championship (Oklahoma, Texas, Texas Tech), as well as two undefeated league champions from outside the automatic BCS qualifying leagues: Utah (Mountain West) and Boise State (WAC). It included undefeated, top-ranked Alabama losing to Florida in the SEC championship game.

Sifting 2008 facts through the strainer of 2014 CFP committee protocol made for lively debates. It caused panelists to separate into different camps about which CFP guiding principles were most important: conference championships won, strength of schedule, head-to-head results or comparative outcomes of common opponents.

Eventually, ESPN analyst Rod Gilmore suggested an exercise that selection committee chairman Jeff Long said he would use with his real-life crew. We went around the room, with each panelist explaining what meant most to him or her in identifying the nation’s top college team.

But the playoff bracket requires four teams. That thrust the discussion toward metrics, where Southern California outlasted Alabama and Penn State on our ballots for the final playoff slot.

Why? Mostly because the Trojans’ defense allowed opponents to score only 28.06 percent of their season scoring averages, by far the best performance among 2008 teams. Defenses at Alabama (48.89) and Penn State (49.76) could not match that percentage.

If your favorite team finishes fifth and misses the playoffs, remember those stats. Something similar will be its shortcoming. Count on it.

Bottom line: Our mock playoff bracket included three 2008 conference champions and one team that was not (Texas). In order, the seeds were Florida, OU, Texas, USC. Texas survived three separate votes to remain at No. 3 despite unsuccessful lobbying from Gilmore and others to elevate USC because of its 2008 Pac-12 title.

A week later, CFP officials held a similar exercise with ESPN employees at network headquarters in Bristol, Conn. It produced the same four teams but in this seeding order: Texas, OU, Florida, USC. Long confirmed that CFP committee members ran the same exercise and wound up with a third different bracket for 2008 teams.

He did not share the difference. But he said it reinforced the belief that panelists in every group will find different measures they consider most significant in separating college football’s top teams.

It’s no easy task. Long and his committee members hope you’ll remember that Tuesday, when they start adding teeth to the weekly CFP playoff projections.

3 Undefeated FBS schools in the AP poll (No. 1 Mississippi State, No. 2 Florida State, No. 23 Marshall) as CFP selection committee members prepare to identify their Top 25 teams for the first time this week.

Trevone Boykin’s stock: TCU quarterback gained ground in a crowded Heisman Trophy race by throwing for career highs of 433 yards and seven TDs in an 82-27 rout of Texas Tech.

—No. 4 Auburn at No. 6 Ole Miss: Another defining game between SEC West contenders with CFP playoff implications.

—Stanford at No. 5 Oregon: Ducks face their perennial nemesis in the Pac-12 North Division race.

Football
NFC preview: How the Eagles stack up against the rest of the conference
771 views

Football
Austin Proehl, hopes to join his father with a Super Bowl ring, helps out by playing role of Edelman
1,650 views

Football
Rested Rams and recovered Aqib Talib know what it takes down the stretch
2,273 views