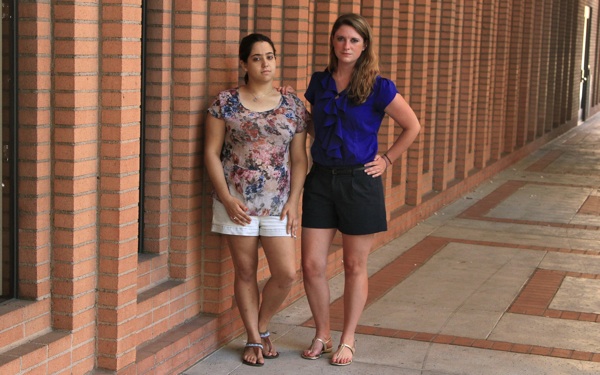 These women filed a complaint against their college over its handling of sexual assaults.
(Credit: Jonathan Alcorn/MCT)

If you had no idea that sexual assault is a problem on dozens of U.S. college campuses, welcome to, um, 2014. Let us catch you up on the news and statistics:

-More than 80 colleges are under federal investigation for their handling of sexual assault cases.

-California had to adopt a new sexual standard ("yes means yes") at its college campuses. The bill requires students to receive affirmative consent before engaging in sexual activity.

-The Rape, Abuse, Incest National Network (RAINN) reports a college with 10,000 students could experience as many as 350 rapes a year.

-And, 1 in 5 women is sexually assaulted while in college; this number can climb to 1 in 4 over the course of a college career.

Recognizing the country's problem with sexual assaults on campuses, Academy Award-nominated and Emmy Award-winning director Kirby Dick and producer Amy Ziering (The Invisible War) have decided to make this the subject of their new film, reports Deadline. The film will follow several people, including survivors, dealing with the trauma. It will also feature the survivors' families and school administrators.

"The statistics are staggering – our country has a moral obligation to address this issue.  We hope our film will provide a wake-up call to our nation to better protect our students," said Dick.

He and Ziering will be working with CNN Films and RADiUS to create the untitled feature. It is expected to release in theaters in 2015. It will then be broadcasted on CNN.