The Kobe Bryant-Dwight Howard Feud is On 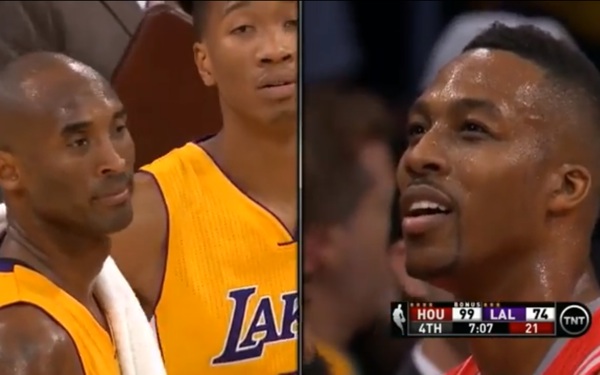 Tuesday night was the tip-off of the NBA season, marking the glorious return of basketball and its preeminent shit-talker into our lives. Coming into the season, Kobe Bryant had already been displaying his midseason cantankerous demeanor, calling out ESPN for its ranking him as the 40th best player in the NBA.

That attitude carried over into last night’s game against Dwight Howard and the Houston Rockets.
The 2012 pairing of Bryant and Howard on the Lakers never felt like a good fit, but, for the most part, any conflict between them was kept behind closed doors during that failure of a season. Howard soon joined the Rockets, and Kobe got hurt, so they haven’t had the opportunity to play each other in some time. It wasn’t until Howard swung an elbow at Bryant Tuesday night that the full extent of their mutual disdain revealed itself.

It’s a shame neither was mic’d up for this game. I’m sure there are countless people who would pay good money to listen to Bryant and Howard jaw at each other. From what we can tell, at the very least, Bryant can be seen saying, “Try me,” and repeatedly calling Howard “soft.”

After the game, both put on their public faces and gave diffusing answers, playing down the situation. When asked about the altercation by reporters, Howard said, “I’m just happy we won the game.” Bryant was in full-on sarcasm mode in describing Howard: “You can’t help but like him. He’s a teddy bear. He’s a really nice kid, and I really mean that.”

The NBA is finally back. And considering the likely trajectory of this Lakers squad, the ongoing rivalry between Bryant and Howard might be the most exciting aspect of this season for fans of the purple and gold.