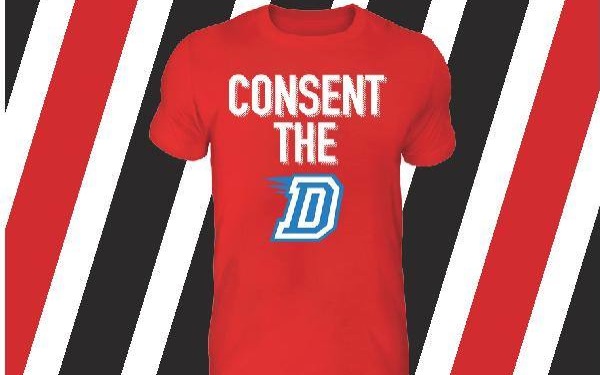 Rape is not just a women's issue; it's a human issue. But what happens when a group of men with (presumably) good intentions try to raise awareness against rape but in the process, prove to be insensitive and offensive to women's feelings? A lot of drama and controversy.

Jezebel reports a non-profit, pro-consent movement called 'Consent the D' is dividing students at DePaul University in Chicago over its offensive phrase. The movement was started by a DePaul University male senior named Randy Vollarth, and he told the school paper, The DePaulia, "There’s been a lot of talk about the issue of sexual assault lately, but nowhere near as much action. The DePaulia boldly called for action on sexual assault a few weeks ago. This is the student response."

It sounds like Vollarth and the movement's members have good intentions, but the phrase "Consent the D" does have an aggressive undertone. It seems to be saying to women, "Just consent to the d*ck." Uh, yeah, that's not exactly how you promote consent, guys.

If you go on the movement's Facebook page, you'll see others voicing the same opinion.

The saddest thing to me about this whole thing is that it's such a lovely concept, wrote one person. But the execution is unintentionally offensive (or so I would hope unintentional) I don't think enough time was put into questioning how women would view this phrase.

The same person also wrote another post that generated more than 20 likes:

There's a difference between telling women to consent and asking them to. "Consent the D" is not asking men to ask for sex and respect the women's choice, it sounds like you're just telling women to consent in a pretty aggressive way: consent the dick... Also not a very tasteful way to bring awareness to an issue that has traumatized so many women.

Let's be clear: College men ARE capable of joining the pro-consent movement and doing it in a less offensive way. For example, "Consent is So Frat" has T-shirts too that say, well, "Consent is So Frat." The goal of this movement, started by a former Wesleyan male student, is to "promote the idea that consent is cool for a fraternity brother."

While CISF does seem to concentrate on preventing sexual assaults among fraternities, "Consent the D" is targeting the entire DePaul campus and striving to "make the country know that we see what's wrong, and we won't stand for it."

It's just too bad that their goal will probably be overshadowed by their poor choice in a phrase.