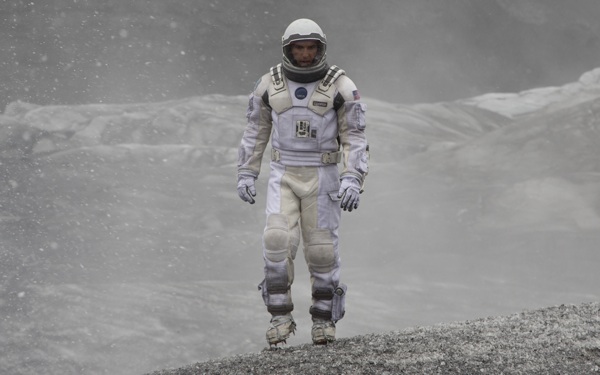 Eight years in the making, and here it is: The much-anticipated Christopher Nolan family space epic Interstellar hits theaters Nov. 5, and it is not expected to disappoint.

At first glance, you might expect Interstellar to play out like your typical space movie. After all, it seems to have a lot of the standard elements found in this genre that we have become used to by now. You might draw comparisons to Armageddon, or you’ll notice there a few catastrophic incidents that are à la 2001 a Space Odyssey.  But when it’s all said and done, Interstellar is more like a cross between Contact, Apollo 13 and…Inception. Why Inception? The answer is simple: relativity.

One of Interstellar’s fascinating aspects is the fact that it accounts for the science behind deep-space travel. The concept of time bending is not only apparent in the film; it’s a plot point as well. The logistics of time bending, and the urgency this creates, is reminiscent of the ‘dream levels’ in Nolan’s 2010 hit.

The script does a great job of explaining the concept of relativity to the layperson, but it definitely helps if you go into the movie with at least a rudimentary knowledge of Einstein’s theories (Watching a few episodes of “Cosmos” might help as you go into this one). Director Nolan commented on the use of quantum physics when developing the concept for the film.

“I spent a lot of time in my work on the script sort of choosing what I thought were the most emotive, the most sort of tactical of these ideas, things I could really grab a hold of,” he said. “And then I found working with it to be very liberating because it wasn’t so much a restraint where science says you couldn’t do this, as it was an exploration of ideas within [the realm of] ‘Well, okay. What’s plausible? Where can we go here? Where can we go from there?’”

What’s chilling about Interstellar is the inciting incident: Humans are forced to leave Earth because the environment becomes inhospitable. It’s a concept that we, as a society, have been toying with ever since the term “climate change” became a buzzword. However, instead of putting the planet at risk of some sort of massive explosion, storm or ice age, Nolan gives us something that resembles our own Dust Bowl.

“What I really loved about John [Nolan’s] original draft was the idea of blight, the idea of it being an agricultural crisis,” he explained. “We combined this with ideas taken very much from Kenny Burns’ documentary on the Dust Bowl.”

But the three-time Academy Award-nominated director said this film is more so about deep space travel than it is about ecology. “It is really about an inevitability. I mean, we’re going to leave this planet at some point. We’re going to go beyond the moon. We’re going to go to Mars. We all kind of know that on some level, I think. So, there’s an inevitability to human evolution, this being the next step, the idea that with this story, you can view the Earth as the nest, and one day we leave the nest. Or, the Earth is the egg, and the egg hatches, and we go. And that to me seemed like a massive thing that hadn’t been addressed in movies.”

Oscar-winner Matthew McConaughey’s character (Cooper) serves to keep the film grounded in reality, though. He isn’t an astronaut, so he is more so motivated by the willingness to get home than he is to explore. “It was apparent to me early on that this film was about family, that it was about parents and children,” said McConaughey, “and I think that’s obviously where the aorta of the film emotionally exists.”

Portraying the character most connected to what is going on back home, McConaughey ensures that the film does not fly too far into space. He keeps the story relatable and presents a sense of urgency for accomplishing the mission at hand. “One of the things that I got from this film,” he said, “is that mankind’s expectations have to be greater than ourselves, and the further out there we go, the more it is we find out and learn that it’s about you and me, right here."

From the cryptic trailers to actual requests from the producers to not spoil the film, there really has been an effort to ensure that Interstellar is an immersive experience for each person that goes to see it. When you do see it, check it out on Imax or 70mm if possible. The movie was shot on film for a reason—you’ll understand why soon enough.

Enter to win an Interstellar prize pack and run-of-engagement passes for the film in L.A. by clicking here!