Cal Chancellor: Bill Maher Keynote Invitation Will Not be Rescinded 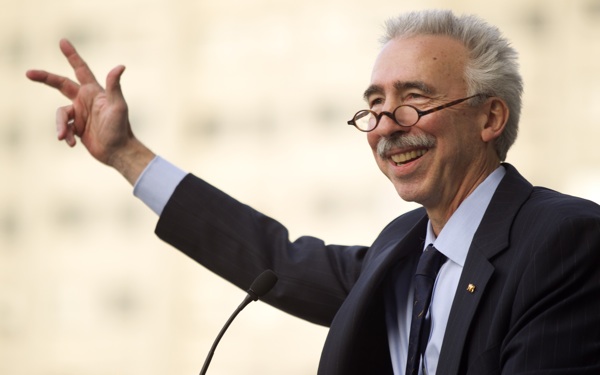 BERKELEY -- In less than a day, a UC Berkeley group voted to rescind TV show host Bill Maher's invitation to speak at the campus's December commencement -- and the campus chancellor, invoking the university's free-speech legacy, rejected that decision, saying Maher was still welcome.

"The UC Berkeley administration cannot and will not accept this decision, which appears to have been based solely on Mr. Maher's opinions and beliefs, which he conveyed through constitutionally protected speech," read a statement released late Wednesday afternoon by the administration.

"For that reason Chancellor (Nicholas) Dirks has decided that the invitation will stand, and he looks forward to welcoming Mr. Maher to the Berkeley campus."

The student group The Californians -- who selected Maher in August -- had been under pressure to act. Some on campus, including Muslim student-leaders who argued Maher's statements about Islam perpetuated hate and misunderstanding of the Arab world, launched a petition on Change.org to stop Maher from speaking.

"Bill Maher is a blatant bigot and racist who has no respect for the values UC Berkeley students and administration stand for," the petition says. " ... Bill Maher's public statements on various religions and cultures are offensive and his dangerous rhetoric has found its way into our campus communities."

As of Wednesday evening, it had collected more than 4,000 signatures.

In a recent "Real Time with Bill Maher" show, Maher said liberals like himself needed to stand up against intolerance, violence and oppression of free speech.

During the discussion, Maher said of Islam: "It's the only religion that acts like the mafia that will (expletive) kill you if you say the wrong thing, draw the wrong picture or write the wrong book."

Students opposed to Maher's selection argued that a commencement address was different from a campus lecture -- that it was a kind of endorsement.

In its statement, the administration rebutted that assertion, saying its decision "does not constitute an endorsement" and that "the administration's position on Mr. Maher's opinions and perspectives is irrelevant in this context."

It went on to say, "More broadly, this University has not in the past and will not in the future shy away from hosting speakers who some deem provocative."

The statement also said the campus would develop a new policy on commencement speaker selection so that future decisions will be handled in line with the campus's "enduring commitment to free speech."

The administration's position was deeply disappointing to Aiman Arif, a senior at Berkeley and president of the Muslim Student Association, who said it was clear that students' complaints had been misunderstood.

"We're not calling to silence Bill Maher," Arif said. " ... But at a commencement speech, where he's speaking to college grads at the most important ceremony of their lives so far, it's not appropriate for that setting."