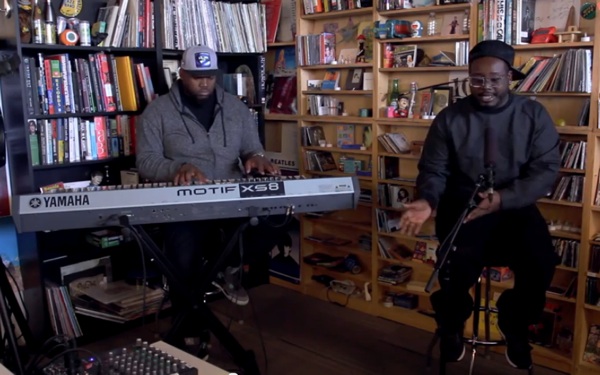 When T-Pain sat down in front of a keyboard, preparing to sing, I was immediately confused: Where is the Auto-Tune going to come from? Wait a minute...is he going to sing SANS Auto-Tune?!

I've seen the singer-songwriter/rapper perform live before at USC when I was a student there, but his voice was definitely Auto-Tuned, and that was okay. After all, T-Pain is basically synonymous with Auto-Tune, even though he didn't necessarily invent it. However, he did make it extremely cool.

In the mid-2000s, T-Pain's Auto-Tuned songs (like the 2007 hit "Buy U A Drank") gave R&B and hip-hop a new dimension of sound, one that was even more lyrically pleasing and catchy. Back then, his use of Auto-Tune was just to add another quality to his music; I never really believed he used it to mask over his voice, which is what some other artists have been guilty of doing (hem, hem, Britney Spears).

T-Pain further proved he didn't need Auto-Tune to make his voice sound "better" when he performed during NPR's "Music Tiny Desk Concert" segment this week. In the video (above), the singer launches into a slower version of "Buy U A Drank." Sitting on a stool in front of a mic, he closes his eyes, and the lyrics float out of his mouth. His voice is smooth yet raw; it's wonderful.

It probably does feel weird to the Grammy Award-winning musician, but this R&B lover felt nothing but chills.

Watch the full video above to see what other songs T-Pain performed!