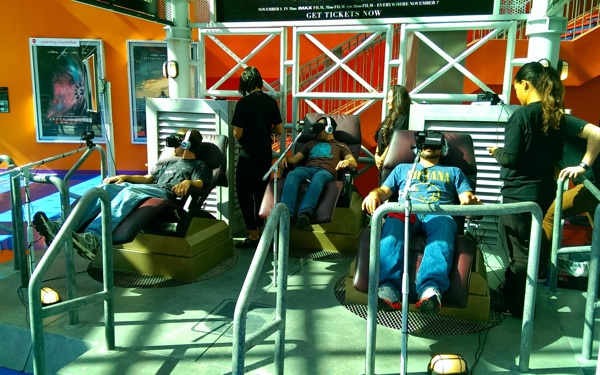 Ever wanted to go to space? Explore a cutting edge spaceship in zero gravity? Unless you’re Richard Branson, this is most likely a pipe dream. Fortunately, Warner Bros has partnered up with virtual reality company Oculus Rift for a unique promotion for Christopher Nolan’s upcoming sci-fi epic Interstellar. Viewers can sit down, strap in and travel in the spaceship from the film, all in vivid virtual reality.

Despite sounding like a Nicolas Cage B-movie, Oculus Rift represents an amazing leap forward in virtual reality technology, causing enough of a stir that it was acquired by Facebook for $2 billion last July. Combining motion sensors, surround sound and, naturally, a really intense headset, Oculus Rift is certainly immersive.

Taking place at the AMC at Universal Studios City Walk this past weekend, the exhibit consisted of three chairs and their designated Oculus Rifts. The excitement, even early around 11 a.m., was really tangible, with a line wrapped around the theater.

Upon sitting down in the comfy, Lazy Boy-esque chair, an engineer mounts the Oculus Rift virtual reality headset on your head, adjusts it to your fancy and puts on a set of headphones.

The first 10 or so seconds of wearing an Oculus are adamant disbelief. You are literally inside of this spaceship. There are 360 degrees of visuals. If you look down, you see a grated floor. Look to the right, and you see the ship's controls. It’s extremely disorienting to start, but once your eyes settle in, it becomes second nature.

For this experience, you’re on a dedicated set path, one that travels through the different areas of the spaceship. You even get to enter “zero gravity” that simulates the experience of floating in conjunction with the high-tech, moving chair that’s part of the setup.

Though short (approximately 3 minutes long), the experience is extremely wild and is, above all, an amazing showcase for this cutting-edge technology. It’s hard to say whether this will sway those on the fence to see Interstellar, but those waiting in line certainly won’t be disappointed.

The traveling tour is now headed to the the Smithsonian National Air and Space Museum and wraps up at the Steven F. Udvar-Hazy Center in Chantilly, Va. on Nov. 6.

Interstellar releases in select theaters on Wednesday, Nov. 5 and nationwide on Friday, Nov. 7, 2014.

Click here to win a free Interstellar prize pack and run-of-engagement passes to see the film!