Vincent Gallo: Filmmaker and Actor Rants About His Controversial The Brown Bunny 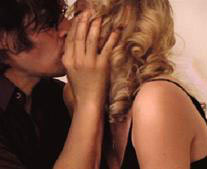 "I’m not an insensitive person," says filmmaker, actor and control freak Vincent Gallo. "I just have moments of insensitivity."

The film’s trailer, which Gallo cut himself, introduces Bunny as "the most controversial American film ever made." While that’s a bold overstatement, the film is glacially paced, oblique and shockingly explicit, certain to confound and enrage many viewers.

On the surface, Gallo’s film seems like an extended moment of insensitivity. Although Gallo contends that the theatrical cut of Bunny is not drastically different from the version premiered at Cannes, audiences are starting to come around. For example, Roger Ebert, who once called it the worst film ever shown at Cannes, prompting Gallo to allegedly wish cancer upon Ebert’s colon. Shortly thereafter, the eminent film critic publicized that he had been fighting salivary gland cancer, leading some to see Gallo as a prescient mystic with otherworldly powers.

"I would love if I had metaphysical powers. But I would use that power for something heroic," Gallo claims. "I’m a custodian; I preserve. What I said about Roger was antagonized out of me by what I felt was an extreme, unrealistic perception he created of my film."

Gallo recently had a chance to sit down and chat with Ebert in person. "He had asked me to meet with him — to appear on his show, and to see my film in its completed state. I prefer that he live with the statement that I made the worst film ever in history.

"I felt that he was trying to get out of that. That he had seen a lot of support for the movie and did not want to be the critic who lambasted it, if he felt that some critics — intelligent critics — would praise the film. And guess what? The first thing he said when I met him: ‘I saw the finished print of your film, and boy, it got much better.’" Gallo adds, "He’s an incredibly engaging person. He’s a real cinephile. He’s an interesting goofball."

Gallo is intimidating, condescending and often brutish, but his devotion to the sanctity of his vision is downright inspiring. So how does he feel about audiences who will flock to Bunny for all the wrong reasons?

"I’m more attracted to the first part of the film than the last part," Gallo says. "What people miss when they focus on what they deem exploitative or titillating, is the film as a whole. They certainly misinterpret the scene which encompasses these actions."

Why, then, is Gallo letting that "scene" speak for The Brown Bunny — most prominently on a now-removed billboard on the Sunset Strip?

"All the advertising I created for the film is extremely conceptual in aesthetic. The billboard on Sunset Boulevard was my dream since I was a teenager. Whatever appeal it had, the intentions were aesthetic and intellectual. That was not mainstream provocation like a Calvin Klein ad."

Later, Gallo adds: "Why don’t you just get to the point and ask why I used sex in a movie? Why ask it in a vague way? I’m not an artist. I’m not doing things to be avant-garde and marginal. I’m moving toward love and hope and beauty. I’m disappointed and surprised when people don’t find my idea of beauty beautiful.

"To make a movie takes years," Gallo continues. "Nothing I’ve done in my life has been self-glorifying. Everything I’ve done has been for personal sacrifice. You think it’s fun to show your cock in a film for 10 billion people to scrutinize for eternity?

"I’ve taken the icons of pornography and juxtaposed them against responsibility, insecurity, resentment, hate, grief, mourning. There’s no way to look at that scene and be aroused. It’s intimacy. If you didn’t feel that, I’m sorry for you."