First Aid Kit: The Sisters Continue to Stay Gold-en as They Embark on U.S. Tour 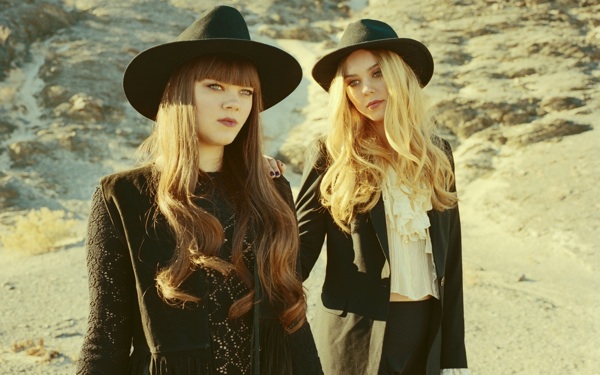 We don't usually associate Sweden with American folk music. First Aid Kit, however, is changing that.

The Swedish band—made up of two crooning sisters, Johanna and Klara Soderberg—creates song after song redolent of the past and Americana with a melancholy that is all the more remarkable given the sisters’ youth.

Born in 1990 and 1993 and brought up in a Stockholm suburb, nothing about First Aid Kit’s history reads of country life, heartache or hard times. But nevertheless, the sisters were drawn to American indie and folk music from a young age.

“The music on the radio was very produced, and this music was so bare and honest and raw and about real people,” explained Johanna, 24. “Bright Eyes was the first band we got into—I’m Wide Awake, It’s Morning. We also loved the Coen Brothers’ soundtrack, O Brother Where Art Thou?” Klara, 21, chimed in, “The harmonies are really inspiring.”

Singing and harmonizing at a very early age, the Soderberg sisters were encouraged by their music-loving parents as well. Their father actually played in a band called Lolita Pop. “We’ve always been singing together,” said Klara.

Another early influence for the young women, who started touring in America at 2010 at the tender ages of 20 and 23, was the Carter Family, a family trio from the South that sang folk and country songs from the 1920s to the 1950s. Founding member A.P. Carter actually catalogued original folk songs and made them into popular hits.

“I just read the graphic novel about the Carter Family (The Carter Family: Don’t Forget This Song, by Frank M. Young). It was so good,” said Johanna. “There’s also a book: Will You Miss Me When I’m Gone—so beautiful. They are really the reason it all started.”

American influences came from all mediums too. As Klara explained, “‘The Simpsons,’ ‘Charmed’ and ‘Sabrina, the Teenage Witch.’ I was convinced I was a witch.”

Johanna agreed. “Me too. I was born on Halloween. Then we discovered we were normal.”

Of course, this duo is not exactly normal with all they success they've achieved already. Their cover of the Fleet Foxes song “Tiger Mountain Peasant Song” in 2008 received some support from the band itself. From there, the sisters managed to get their first album, The Big Black & the Blue, to one of their idols: Bright Eyes’ Conor Oberst, who included the girls on one of his albums. They also connected with Jack White, and he produced a single for them.

Fast-forward to 2014: The sisters have released another album, completed a sold-out U.K. tour and kicked off their fall U.S. tour in New York City in October. They will be performing at Los Angeles’ Wiltern Theatre on Wednesday, Nov. 12.

“We have pretty crazy lives,” Klara admitted. “We're living the dream. We get to make music, and it’s very cool.”

First Aid Kit’s latest album, Stay Gold, picks up right where The Lion’s Roar left off with gorgeous vocals, harmonizing and songwriting. The title track was inspired by Robert Frost’s poem, “Nothing Gold Can Stay.” Bursting with yearning and nature, Frost is a good fit for the sisters.

“Music is a way to escape,” said Johanna. “When we write songs, we see images in our heads—images of nature and another time, when things were more simple and untouched. There is a sense of longing, of sadness. We’re not depressed people, but when we write, we go to that dark place. Music is a way of healing. All of it’s a mystery, being alive and being a human being.”

So what’s next for the sisters? After having worked already with Jenny Lewis and Bright Eyes, the sisters set their sights pretty high. “We would love to sing with Emmylou Harris, Leonard Cohen. Jack White, of course.”

Most likely they will. With their impressive track record, the Soderberg sisters seem to achieve everything they set out to do.

See First Aid Kit live at the Wiltern on Nov. 12.