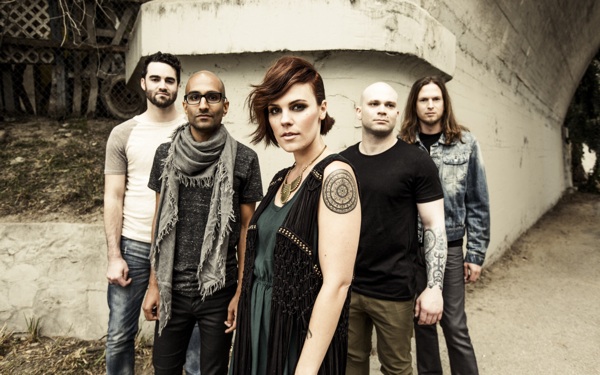 Guitarist Sameer Bhattacharya of Flyleaf was enjoying a day off while on the road when we talked for a bit on the phone. The tour has been going well for the band, and they are excitedly looking forward to their night in Hollywood at the House of Blues on Tuesday, Nov. 4.

The day before the interview, the multi-platinum alternative rock band—consisting of Bhattacharya, Kristen May, Kirkpatrick Seals, James Culpepper and Jared Hartmann—played the Summit Music Hall in Denver, Colo. When I asked how that show was, the seemingly always-positive Bhattacharya answered, “It was awesome. Every city has something that makes it great. No show is exactly the same. We feed off of the energy of the crowd.”

The band has sustained some line-up changes throughout the years, but the writing process seems to have stayed the same. Flyleaf’s latest album, Between the Stars, is packed with thought-provoking, meaningful, inspirational lyrics. “The album is still new, so we're enjoying sharing that," said Bhattacharya. “We all hope [Between the Stars] inspires people to keep living life, living it to the fullest."

Touring in support of Between the Stars, Flyleaf is thrilled to be back on the road with its newest member, May, on lead vocals. “Kristin has a big heart,” said Bhattacharya of his fellow bandmate. “She’s a people-person and puts her all into it. She gets out there in the crowd, and it becomes a big show.”

The band has made an effort to be in the open and communicate with their fans, largely thanks to social media. “Twitter and Instagram make bands accessible,” said Bhattacharya. “If I could have gotten a response form Thom Yorke when I was in high school, it would have been amazing. Social media makes things like that possible.”

This accessibility contributes to Flyleaf’s overall live show; the entire experience becomes interactive and allows more involvement from the communities around them.

Recent news about the House of Blues shutting its doors on Sunset Boulevard shocked Angelinos, especially those who have been frequenting the venue to see live performances since it opened 20 years ago. Flyleaf is grateful to be soon performing at the historic venue. “We're glad we'll be playing there before the venue closes or changes,” said Bhattacharya. “That was sad news to hear."

But, gauging from fans' responses to the band's previous shows, it seems that Flyleaf will be giving the House of Blues at least one more high-energy show before it shuts down.