By Karen D’souza And Jim Harrington 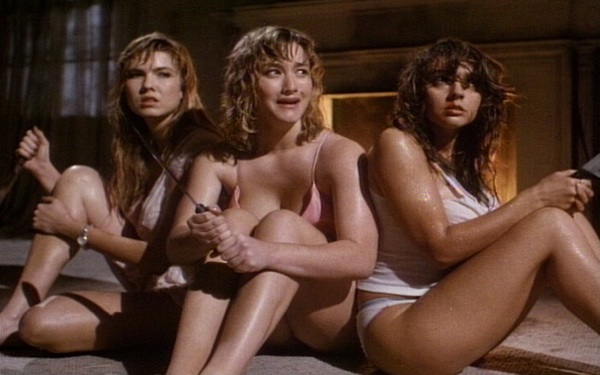 The tingle in the air can only mean that fright night is here once more. In honor of Halloween, we are delving into the pulse-pounding realm of dark romance.

Sex and death have long been intertwined in the world of horror movies, with everyone from vampires to serial killers trumpeting the carnal and the charnel from the days of Count Dracula on.

Although no vampires made our lists, here’s our guide to the 10 sexiest horror movies of all time. Some have a lurid mix of sex and death, some are arty and stylish, but all are hot enough to get the adrenaline racing.

Notorious (1946): Human evildoers are always far more sinister and disturbing than supernatural baddies in my book. This sultry thriller from Alfred Hitchcock, the master of suspense, explores real-life monsters — in this case Nazis in their quest for world domination. This black-and-white picture gets its heat and light from the chemistry between Cary Grant and Ingrid Bergman. One of the jewels of the film is Hitchcock’s trick to get around the Production Code’s ban on kisses longer than three seconds. Here the actors stop and start every three seconds, nuzzling and murmuring in between locking lips, making the whole scene far more feverish. If you like this, try: Vertigo (1958).

An American Werewolf in London (1981): Hard-partying American backpacker dudes, a full moon, a naughty nurse (British actress Jenny Agutter) and the curse of the werewolf are the key ingredients in this John Landis gem. Comedy, raunchiness, raging hormones, foggy moors and the still-impressive special effects and makeup (especially the wolf transformation scenes) combine in this modern horror classic. But it’s the electric charge between David Naughton and Agutter that gives this movies its spice. If you like this, try: Phantasm (1979).

Cemetery Man (1994): This breathless Italian import directed by Michele Soavi (a protege of Dario Argento) is one of the sexiest horror movies to come down the pike. Broodingly attractive Rupert Everett stars as the title character, Dellamorte Dellamore, a cemetery groundskeeper who tries to keep the undead under wraps. His avocation for the afterlife is rivaled only by his hunger for a mysterious woman (the fierce Anna Falchi) who keeps being reborn as different femme fatales, all of whom jump into bed with him. Zombies, reapers and sly existential metaphors exist side by side in this hot-blooded flick, based on the 1991 novel by Tiziano Sclavi. If you like this, try: Dead and Buried (1981).

Swimming Pool (2003): Plunge deep into the shadowy waters of sexual fantasy and repressed identity in this chic British mystery. A chilly and prim author (Charlotte Rampling) and a smoking-hot party girl (Ludivine Sagnier) vie for power in a South of France country house. Watch for a nice small turn from Charles Dance of “Game of Thrones” fame. Murder, lust and you-never-see-it-coming twists heighten the thrills of this sensual thriller. If you like this, try: High Tension (2003).

House of 1000 Corpses (2003): Heavy metal icon Rob Zombie made a huge splash in the horror movie world with this daring debut, which follows the Firefly family along some truly psychotic pursuits. It’s a twisted film made all the more bizarre by the untamed sexuality of “Baby Firefly,” who is played to perfection by the director’s wife, Sheri Moon Zombie. She’s selling seduction every time she takes to the screen, but it’s definitely in your best interest to resist. If you like this, try: The Devil’s Rejects (2005).

Videodrome (1983): It isn’t among director David Cronenberg’s best, a list that would include 1981’s Scanners and 1986’s The Fly. This film just feels a bit dated, even if its cautionary message about the pitfalls of a voyeuristic society still seems relevant. But one aspect of Videodrome has survived the years quite nicely: the on-screen chemistry between James Woods and Debbie Harry. The veteran actor and the Blondie vocalist deliver some truly steamy — and unusual — moments, exploring the connection between pain and pleasure. If you like this, try: eXistenZ (1999).

Resident Evil (2002): This sci-fi horror film, adapted from he video game of the same name, stars supermodel Milla Jovovich, which is really all you need to know about why Resident Evil is on this list. But there’s more than just her looks going on here — it’s how Jovovich carries herself on-screen that truly makes this film so sexy. Jovovich’s “Alice” is one of the strongest, most compelling action heroes that the action-horror genre has ever seen. The fate of humankind continually rests on her shoulders as she battles zombies, monsters and the evil Umbrella Corporation, and she handles each situation with style. Consider this as proof positive that strength and confidence can be every bit as alluring as lingerie. If you like this, try: Any of the four Resident Evil sequels.

Sorority House Massacre (1986): It’s a pretty run-of-the-mill slasher flick, with college kids doing things that college kids do and, correspondingly, slashers doing the things slashers do. In other words, it’s must viewing for any self-respecting horror-movie nut. We don’t want to give too much plot away, but let’s just say that it shares much in common with a certain iconic John Carpenter film that is set on Halloween. Still, what this film lacks in originality, it makes up for with some memorably sexy scenes, including one that provides a voyeur’s view of a dress-up party. If you like this, try: The House on Sorority Row (1983).

Swamp Thing (1982): Two words: Adrienne Barbeau. That name might not mean much to anyone under 30, but there was a time in the 1970s and ‘80s when Ms. Barbeau was one of horror’s hottest sex symbols, and she starred in a string of sci-fi-themed flicks. Her charms are certainly put to good use in this underrated Wes Craven-directed film, which is based on the DC Comics character. It’s a mossy spin on the old Beauty and the Beast storyline, with Barbeau every bit holding up her end of the bargain. If you like this, try: Man-Thing (2005).