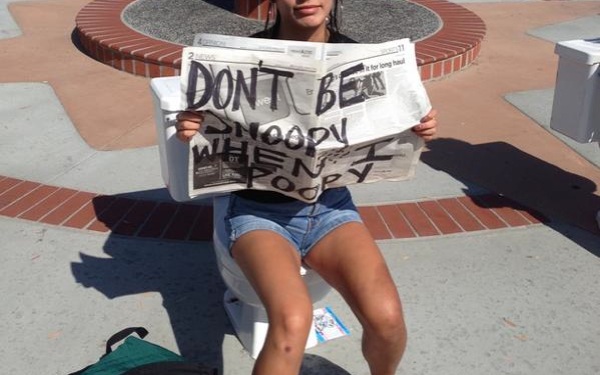 Students at San Diego State University organized a demonstration to bring awareness to the need for gender-neutral bathrooms on their campus on Oct. 21. The aptly-titled “shit-in” featured the placement of several toilets outside a building on campus where students gathered to hand out information on gender-neutral bathrooms and to sign a petition. And, those who participated in the event found a way to incorporate social media to spread their message by taking pictures on the outdoor toilets and posting them to Twitter and Facebook with the hashtag #SDSUShitIn.

Additionally, The Trans Action and Advocacy Student Union encouraged fellow students to not use any bathrooms marked “men” or “women” for one week, and to instead use one of the few gender-neutral bathrooms on campus in order to demonstrate the need for more. The SDSU campus has 344 gender-segregated bathrooms and only 15 gender-neutral options, according The Huffington Post.

SDSU student A.T. Furuya told HuffPost that number needs to increase, and more conveniently located gender-neutral bathrooms need to emerge. “The restrooms are located in far and inconvenient places. This campus has over 33,000 students it's time it became more accommodating for those that need access to use the bathrooms.”

The Transgender Action Advocacy Student Coalition wants every building on the SDSU campus to have at least one bathroom that is gender-neutral. Using the men’s or women’s bathrooms can be an uncomfortable or even dangerous experience for a transgender person, according to one of the attendees of the “shit-in,” LGBTQ activist Paul Rhodes. “When I was transitioning, the choice was often between going into the women’s bathroom and getting yelled at, or going into the men’s bathroom and getting beat up,” Rhodes told The College Fix.

If you’re still wondering why there’s a need for gender-neutral bathrooms, check out this opinion article from Slate.