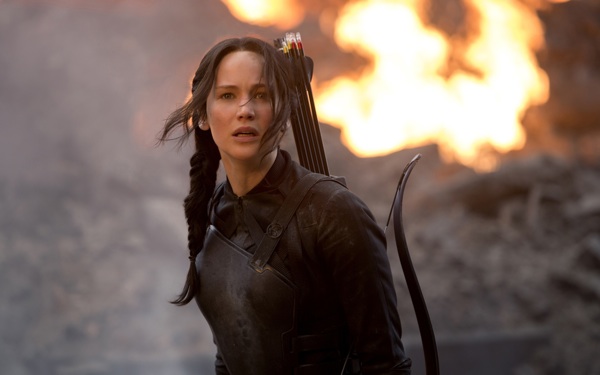 In a barren Georgia warehouse on a cold January day, Jennifer Lawrence was doing something unusual for the young Oscar winner. She was acting very, very badly.

Lawrence was filming a scene for The Hunger Games: Mockingjay — Part 1, in which her strident archer Katniss Everdeen was attempting to summon righteous indignation for a propaganda piece designed to stoke a nascent uprising.

Katniss may be many things — a fierce warrior, a devoted sister, a reluctant symbol of hope — but a talented thespian she is not, and Lawrence was giving it her all.

“She was very good at it,” director Francis Lawrence recalled of his star’s ability to turn in an intentionally lousy performance. “We had a bunch of variations, but we didn’t want to go too far. Some were really broad and funny but not quite tonally right for the movie.... It was a nice couple of days of laughter on set.”

If the scene stands out in the film, which arrives in theaters Nov. 21, it’s largely because comedy is in short supply in The Hunger Games. Lionsgate’s franchise adapted from the bestselling young adult novels by Suzanne Collins deals principally with mature, timely themes, such as the consequences of violence and the devastating toll of war.

Perhaps owing to its topical poignancy, Collins’ work spawned one of Hollywood’s most successful film series, catapulting Lawrence to the center of the pop culture limelight and offering audiences an emotionally compromised but resourceful cinematic warrior as compelling as Sigourney Weaver’s earlier sci-fi heroine Ellen Ripley.

“Katniss represents to me a movement and an awareness for our younger generation — she possesses strength, compassion and the bravery to do what’s right even when it’s not easy,” Jennifer Lawrence wrote in an email to The Times.

“She is a lightning rod in the movies, she is a lightning rod in real life as a character,” added Hunger Games producer Nina Jacobson. “People relate to her.... I’m moved by the degree to which Katniss embodies the ability of one person no matter how flawed, how complicated (to) make an enormous impact just by doing the right thing when given the choice.”

Mockingjay — Part 1 finds Katniss living in the underground District 13 with her mother, sister and childhood friend Gale (Liam Hemsworth) and wrestling with the responsibility of helping to foment a rebellion that could topple President Coriolanus Snow (Donald Sutherland).

She agrees to an alliance with military strategist Alma Coin (franchise newcomer Julianne Moore) in exchange for Coin’s promise to rescue her longtime ally Peeta Mellark (Josh Hutcherson) and other former combatants from their Capitol captors.

BIG BREAK FOR THE DIRECTOR
The filmmaker (no relation to Jennifer) first traveled to Panem with last year’s The Hunger Games: Catching Fire, taking over the series from director Gary Ross, who launched the movie franchise in 2012. A veteran of music videos, Lawrence previously had helmed two spectacle movies — 2005’s comic book adaptation Constantine and 2007’s I Am Legend, starring Will Smith — and 2011’s literary drama Water for Elephants.

Early on in the production of Catching Fire, Francis Lawrence was offered the chance to direct the two-part finale (Mockingjay — Part 2 is set to open Nov. 20, 2015). “That was really exciting because I think quite honestly this book and these two movies are what give meaning to the whole series,” said Lawrence, seated in his no-frills office in West L.A.

From a purely professional vantage point, Mockingjay was a wildly ambitious endeavor for Lawrence. The two installments of the finale were shot continuously in and around Atlanta, Paris and Berlin, with production stretching from September 2013 to June on a combined budget that some reports have placed at $250 million.

The crew faced down additional hurdles courtesy of a polar vortex that blasted Georgia with freezing rain and snow late last year. “We actually were shut down, I think, for a total of three days separate times because of ice storms,” Lawrence said. “The places we were shooting were not built for that kind of a winter.... We were always shooting in these big warehouses or basements or parking garages, and it was freezing.”

Then the sudden, shocking death of Philip Seymour Hoffman, who succumbed to a drug overdose in his New York apartment in February, delivered an emotionally devastating blow to the cast and crew. “It was really rough,” Lawrence said. “We went dark. It happened on a Sunday, and we couldn’t get everybody together on the Monday. We reorganized the schedule.... We kind of eased everybody back into work. It was also after one of those freezes. It was 10 degrees and miserable.”

Hoffman had two “substantial” scenes left to shoot, one for each film in the finale, Lawrence said, but the Oscar-winning actor’s absence was addressed largely through revisions to the Mockingjay scripts, written by Danny Strong and Peter Craig. “We gave the scenes to other people,” he said. “What we didn’t want to do was try to do any kind of digital trickery, not have a digital Phil speak and trying to patch together his voice somehow or anything like that.”

A FEW DEVIATIONS
Rarely do the Hunger Games films take liberties with Collins’ text, but each movie does deviate from its source material in small, if still significant, ways. Hoffman’s role, for example, was expanded from the novels; similarly, Moore’s Coin will be a greater presence on screen.

“Julianne had a few ideas on how to play her,” Lawrence said. “There was a quiet strength; that was one of the big things that she wanted, so you’ll notice that Coin speaks sort of softly. There’s, I guess you would say, a warmth that you might not get from her in the book that Julianne wanted to bring.”

The decision to divide the finale into separate films too was rooted in a desire to more faithfully adapt Mockingjay, according to producer Nina Jacobson, though the move certainly is in keeping with recent trends to elongate franchises and surely supported by healthy box-office prospects. (The conclusions to both the Harry Potter and Twilight series, for example, were two-parters, each of which earned hundreds of millions in North America alone.)

“A lot happens in the Mockingjay book, and to try to cram it all into one movie, I think we would have never had the time to spend with the relationships and with the characters,” Jacobson said.

For Jacobson, it’s the characters, specifically Katniss, that are the key to the series’ appeal.

“What we’ve tried to preserve from Suzanne’s books is a sense of a story, which is at every turn informed by the trials and tribulations of these characters,” Jacobson said. “I think Francis has proven extraordinary at doing that and being able to balance ... spectacle and intimacy. It’s great to try to hold on to real human experience as much as possible.”