Aussie Band Sheppard Makes a Splash in the U.S. with 'Geronimo' 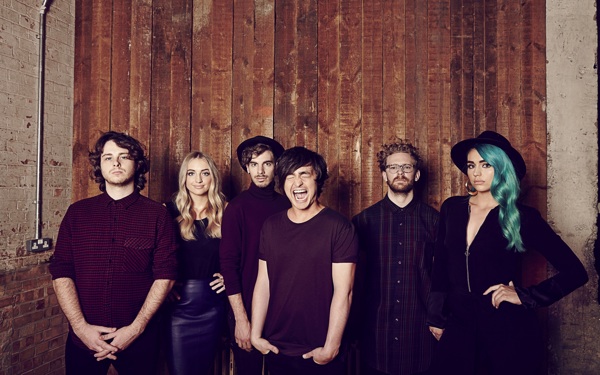 George Sheppard (middle) is the older brother of Amy and Emma.

The Aussies are invading the country. Cody Simpson, Iggy Azalea, 5 Seconds of Summer—these musicians have found success in the American music scene with their catchy songs and creative lyrics. Now, it’s Sheppard’s turn to captivate the American crowd.

The six-piece family band—siblings George, Amy and Emma Sheppard make up the band’s core—recently made its debut on the “Ellen DeGeneres Show,” where they performed their hit single “Geronimo.” The inspirational song is about taking a leap of faith, and that is exactly what Sheppard has done with amazing results. The single has become the highest-selling Australian single of 2014, and in the U.S., “Geronimo” continues to skyrocket, especially after NBC used the song for a lip-dub proposal for its new show “Marry Me.” The touching video has more than 4 million views.

On Tuesday, it was announced Sheppard will be joining “All About that Bass” singer Meghan Trainor on her 2015 That Bass Tour (expect to see the band at the El Rey Theatre in February!).

Calling from New York City, lead male vocalist George Sheppard caught up with Campus Circle to talk about the Geronimo EP, Coachella and the reality about getting a college degree.

When I first saw the “Geronimo” lip-dub proposal for NBC’s “Marry Me,” I almost cried. Did anyone in the band feel the same way?
I definitely got a little misty eyed. I tried not to show it because I’m a tough man (laughs). I teared up a little bit; I’m not going to lie.  It was such a cool video, and we were just so stoked to have been a part of such an important moment in their lives. Someone just said, “Hey, watch this video of this proposal,” and we thought we were going to be watching another viral videos. And then “Geronimo” started, and we were like, “Oh my god. Is this real?”  And then they started lip synching to it and dancing to it—it was a very cool moment for us.

When you’re traveling, is there something you long for back in Australia?
I definitely miss the bacon we have back home in Australia. The bacon you guys have here is like crispy, fried fat. But in Australia, it’s actually meat (laughs). Everyone’s going to hate me, but that and…Tim Tams, which is like a chocolate biscuit. I’ve been around the world now, and there is no biscuit that is quite like a Tim Tam. If you can get your hands on one, I strongly suggest that you do.

What advice would you give college students who want to pursue something in the creative field but are re-thinking getting a college degree?
I think that going to university definitely has it merits, but there’s something special about discovering it all for yourself. Pretty much everyone in the band, we’re all sort of self-taught musicians. Especially the business aspect of it all, it’s all learning on the job. I don’t think there’s any better way to learn. You can go to a university, you can study and read all the lines in a textbook, but when push comes to shove, you’ve got to be able to put it to practical use. If you’re re-thinking your degree and you’re just starting, I would say yeah—just do it yourself.

Is there a venue or place on your bucket list that you want to perform?
Coachella! I’ve seen so many live videos from Coachella, and it looks like the most incredible place to play. That would definitely be the one spot on our bucket list.