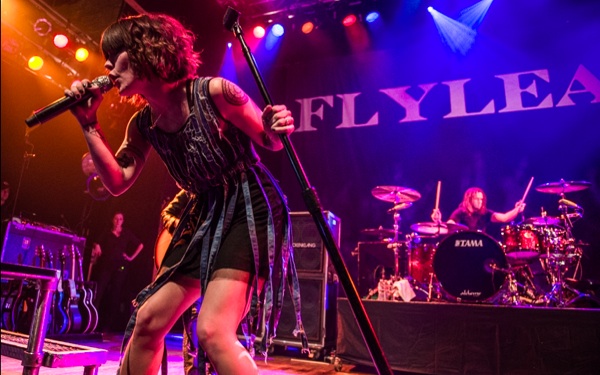 Flyleaf took over the stage at the House of Blues with the energy of 10-year-olds on a sugar high.

Tuesday night, the Sunset Strip’s famous venue was filled with 20-somethings who were ready to have a good time. Though the band has been active since 2002, the audience members I spoke to were new fans who fell in love with Flyleaf within the past five years. And some had trouble waiting patiently for the band. When the curtain rose, one fan yelled, “Don’t tease me!” while another screamed, “We can’t take it any more!” Flyleaf appeared on time, so perhaps the impatience was just uncontainable excitement.

Flyleaf started out the night with “Fully Alive” from its 2005 self-titled debut studio album, and it was then followed by a 14-song set, mixing in older tracks with new music from the most recent album Between the Stars. When the band ended the night with “City Kids,” the crowd was dissatisfied; they wanted more. So, Flyleaf returned to the stage with “I’m So Sick" and "So I Thought.”

The guys in the band—Sameer Bhattacharya, Jared Hartmann, Pat Seals and James Culpepper—sang and yelled along with lead vocalist Kristen May. They also performed their solos while hanging at the edge of the stage. May, dressed in a fringed dress, kept the energy up with her high-powered vocals and dance moves, encouraging the crowd to join in.

When I spoke to Bhattacharya last week, he warned the band’s show at House of Blues was going to be nonstop, high energy—and he was right. Seals (bass) and Bhattacharya (guitar) jumped from platform to platform, dancing and head banging like they were at their own favorite show. The five piece kept the audience involved and made it a night to remember.

Though Flyleaf is nearing the end of its tour, the band is still on the road to Anaheim and New Mexico to finish out the leg. As Bhattacharya said, "We hope the new album inspires people to live life to the fullest." Cheers to a band that truly lived up to that last night.