Teams are Forcing the UCLA Offense to be More Patient 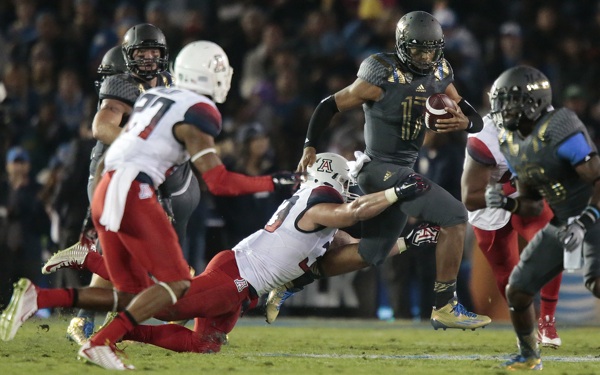 UCLA has faced the same defensive tactic in recent games, where teams often dare the Bruins to do anything but throw deep.

That has required the Bruins to make adjustments.

“The hardest thing, especially with our style of offense, is patience,” Mazzone said. “We want to go fast. I thought the guys did a nice job of being patient last week against that style of defense.”

The Bruins also found a way to attack it, finishing with 298 yards rushing against Arizona. Quarterback Brett Hundley often dropped back to pass and found receivers covered. He would find a seam to run and take off. He finished with 131 yards on a career-high 24 carries.

“Against a pressure defense, it’s feast or famine,” Mazzone said. “When they are playing 'bend, don’t break,' you can’t have penalties, you can’t get yourself off schedule. Instead of four- or five-play drives, you have eight- or nine-play drives. When the opportunity presents itself, you have to take advantage of shots downfield.”

Kenneth Walker III could be a part of that effort this week. The speedy receiver is getting more work in practice. He has one reception this season, a 62-yard touchdown catch against Memphis.

“He brings one thing to the table every day: explosiveness,” Mazzone said. “We have to do a better job of getting him into situations where we can take advantage of that.”