Chris Pine Stretches Out in Bosses, Into the Woods 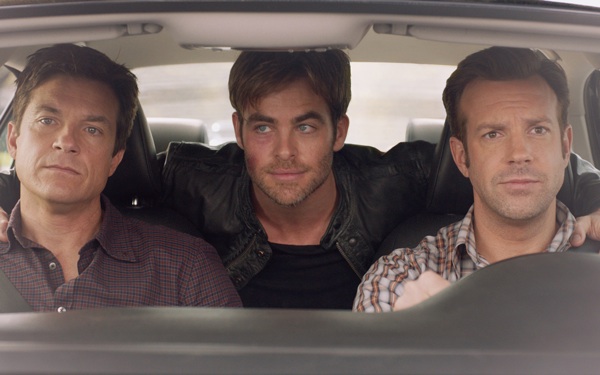 As Captain James T. Kirk in the rebooted big-screen Star Trek franchise, Chris Pine has taken up the Shatnerian mantle in two blockbuster films and boldly gone where no one has gone before. In the galaxy that is Hollywood, however, after you’ve played a hero like Kirk, it can be tricky to go anywhere else.

“Once the business sees you in a certain light, they want to capitalize on that,” said Pine, 34. “You have to go out of your way to let people know you’re interested in doing other things.”

With a pair of wildly different — and decidedly un-“Trek”-like — roles in upcoming releases, Pine is letting the world know just that. In the R-rated comedy sequel Horrible Bosses 2, opening Nov. 26, he plays Rex, a slick, amoral corporate tool who becomes ensnared by three dimwitted friends (played by Jason Bateman, Jason Sudeikis and Charlie Day) in a horribly botched kidnapping plot. A month later, Pine will costar with Meryl Streep, Anna Kendrick and Johnny Depp in the Dec. 25 adaptation of the Stephen Sondheim fairy-tale fantasy musical Into the Woods, playing Cinderella’s Prince.

On the face of it, Pine, who has done few outright comedies, seems an unlikely choice for Horrible Bosses 2, which follows the 2011 hit. But when director Sean Anders was co-writing the script, he remembered seeing a then largely unknown Pine on stage in a 2007 production of the darkly comic Neil LaBute play "Fat Pig,” playing a character every bit as coldblooded as Rex.

“Let’s face it: Most for lack of a better word ‘pretty-boy’ actors don’t have the chops that a lot of the comedy guys have,” Anders said. “But every now and then a guy like Alec Baldwin or Jon Hamm comes along. I knew Chris was one of those guys.”

Pine didn’t see Rex as dastardly so much as damaged. “What interested me about him was that he wasn’t just a bad guy for bad guy’s sake,” Pine said. “He was a kid who wanted his dad [played by Christoph Waltz] to love him, but he continually kicked him to the curb and created this sociopath.”

Into the Woods is an equally surprising pick for the actor. The extent of his singing background? “In high school, I once sang ‘Let’s Get It On’ and ‘Brown Sugar’ with a band that included my English teacher and my math teacher,” said Pine.

The industry might want to put him in the action-oriented leading man box, but Pine is clearly just as happy, if not happier, exploring more unexpected corners, even if that means his name isn’t always at the top of the call sheet.

“Sometimes it’s nice not to have to do the heavy lifting,” he said. When it comes to his career, he added, “I kind of take it as it comes.”

Even a Starship captain takes his hand off the wheel once in a while.

Win a pair of tickets to see the film at an advanced screening in Los Angeles or Orange County!