The Academy Is..: Almost Here With a Little Help From Their Friends 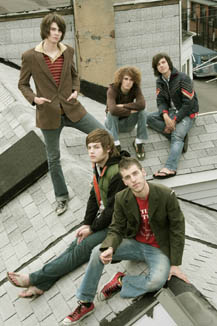 The Academy Is’… guitarist Tom Conrad wholeheartedly agrees with the lyrics from the title track of the group’s debut album, The Academy Is … Almost Here. The song states: "I’ll take my chances on truck stops and state lines," and Conrad says, "That’s definitely what I’m doing. I’m just taking chances."

Having rolled the dice in the music industry, TAI is finally starting to cash in. Just back from a sold out tour in the U.K., TAI is currently on its first headlining tour with Panic! At the Disco, Acceptance and Hellogoodbye. The "Truckstops and Statelines" tour has officially sold out across the country.

"When we booked this tour, nobody knew it would be as big as it was," says Conrad enthusiastically. "Every band is just blowing up. I’m so proud of it and it makes me happy to feel like the kids that came to the show can look back and say, ‘Wow, do you remember that tour?’"

Yet Conrad cites humble beginnings behind their success, along with a little help from their friends. "We grew up right outside Chicago along with Fall Out Boy, doing shows on the outskirts of the city. Chicago’s always been this nest, this melting pot of musicians and bands."

Having made its mark with the success of its album From Under the Cork Tree, Pete Wentz of Fall Out Boy heard TAI’s recordings in the studio and immediately asked FOB’s record label, Fueled By Ramen, to take a listen. Consequently, the label snatched the group up shortly after.

Fronted by charismatic vocalist William Beckett, guitarist Mike Carden, Adam Siska on bass and Andy "The Butcher" Mrotek on drums, Conrad feels blessed to be working with his friends as well as bands that have helped them along the way.

"It’s family; it’s brothers," says Conrad of the camaraderie among his musical peers. "Everybody is looking out for themselves but everyone’s looking out for each other too, you know? Everything that Fall Out boy does, we go, ‘Whoa! We want to do that and we’re going to make it ten times better.’ I’m sure they do that too."

With catchy, pop punk tunes mixed with Beckett’s smooth, melodic voice, The Academy Is … has captured fans with songs that relate and lyrics that often describe hard times while striving to make it big. The words from "Black Mamba" provide a good example:

"We’ve got one chance to break out, and we need it now. I’m sick and tired of waiting, sick of this fucking apartment … This is the voice that I was given and if you don’t like it, take a walk off of the shortest pier you can find, and I’ll be singing out."

Having just wrapped a taping for the "Carson Daly Show," TAI is the new kid on the block but is taking over the neighborhood fast. The band’s first single "Checkmarks" broke-out on the college-orientated MTVU, where the song ranked number one on the Dean’s List for eight weeks. The next single, "Slow Down" is sure to be a fixture on the List as well.

"We did so well on MTVU, they just invited us," says Conrad of the group’s appearance on MTV’s "Spankin’ New Music Week." "If you saw the other acts – Avenged Sevenfold, Yellowcard, All-American Rejects – we were like, ‘We don’t even have CD sales yet!’"

TAI has also worked hard to build a loyal fan base, meeting and greeting fans after shows to express its appreciation. In fact, the band’s newly released acoustic EP entitled The Academy Is … From the Carpet, exclusively downloadable on itunes, was a fan-motivated project.

And the message to fans Conrad would most like to convey? "It would be to hope and take chances. Everybody has that big goal and big dream," he reveals, speaking for the fans and the band as well. "We just need to hold our heads high and keep working hard, you know?"

The Academy Is…Almost Here is currently available. For more information, visit www.theacademyis.com.
Article posted on 3/13/2006
This article has been viewed 2408 times.