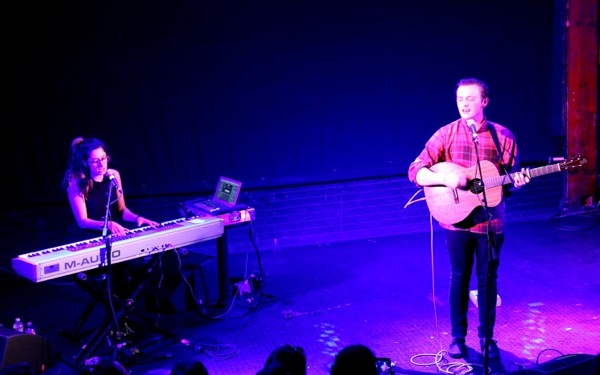 Lewis Watson unplugged his guitar and stepped away from the microphone and asked his attentive audience, “Can everybody still hear me?” When the young singer-songwriter got a resounding ‘Yes’ from the fans, he went ahead with his “last-minute decision” to perform “Halo” (the only song that got this treatment) with no amplification. The crowd, the vast majority being teenage or college-age girls, held its breath as a collective and leaned forward. The truly extraordinary experience can be summed up easily: It was an intimate show.

The English musician began his show Sunday night explaining that there was nobody else on the Troubadour stage—except for keyboardist and back-up vocalist, Roxanne—because his band had visa issues. However, this may have been a sort of blessing in disguise. The atmosphere felt less produced and even cozier, especially when Watson asked the room to sing along if they knew the lyrics. With that, though completely in control of his beautiful vocals, he became entirely vulnerable to his listeners.

During his opening, “Sink or Swim,” Watson was clearly pleased with his fans’ ability to sing whole lines on their own, smiling sheepishly and even inserting an, “Oh, you sound so good.”

Audience members continuously tried to return the compliment with loud cheering and declarations of love between every song, which once prompted him to say, “You’re forward in America, but I love you too.”

Watson seemed so genuinely thankful for each and every person that came out to fill the West Hollywood venue that he even pulled up a girl from the audience who had to leave early to make her curfew. He said he had to take a picture with her now, but that he would stay after the show to meet everyone else.

The Oxford man’s gratitude was perhaps most evident during his performance of “When the Water Meets the Mountain.” During this song, his captive and young listeners turned on their cell phone lights and waved them in the air.

“Wow,” said Watson with wonder and a smile. “Thank you, that was amazing. I opened my eyes, and I thought I was floating through the sky.”

He apparently enjoyed the concept so much that for his encore, he asked if everyone could turn on their phones so he could turn off the lights. Then, he requested the ground floor to make a circular space, which he squeezed into and performed right amongst his fans. (Clearly the lad’s not claustrophobic!)

It was truly as intimate as anybody could possibly ask for. But more importantly, Watson’s voice held its own in that intimacy. In fact, he is one of those few performers who bring something unique when performing live. Suddenly, his songs have a different weight to them, and his vocals have a beautiful, raw feeling of reflection—it's as if he’s singing just to you.