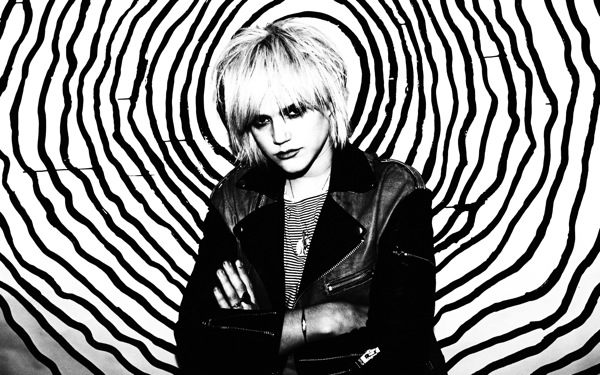 French indie-folk singer Soko has set her sights on capturing the independent artist mountain while currently touring with Foster the People. Consumed with passion and overwhelming emotion, she wanders from city to city, wearing her heart on her sleeve and a notepad in hand, documenting each event worth immortalizing.

On Nov. 14, Soko will be performing at the Shrine Auditorium in L.A. We caught up with the singer/actress as she winds down her tour and prepares for her latest album to drop early 2015.

Campus Circle: After seven weeks on the road, your North American tour concludes here in the west coast. Can you share some favorite memories that will remain with you long after the tour concludes?
Soko: This has been such a crazy ride. On top of the Foster shows we played, which were in huge arenas or massive theaters, we also added some more DIY intimate shows on our days off, and those kept us on our toes on tour. We played in amazing art spaces, sometimes inside living rooms, in cool indie clubs. Once, we played outside while a thunderstorm was happening and cut off the power. We just had to embrace it, get under the rain for an appropriate rain dance and as soon as the storm passed we were back on stage with more fire than ever. We also played a really cool record store in Savannah, Ga. called Graveface and got the whole crowd topless, boys and girls, no bras allowed. That was punk as fuck and pure awesomeness. So once we hit Florida, we would go to the beach everyday and went tubing down crazy, amazingly beautiful rivers and went to Universal Studios too. This tour has been wild.

Can you shed some light into the making of the new album and the direction in which it’s taken compared to your previous musical efforts? What were your thoughts on collaborating with Ross Robinson?
I reached out to Ross in the first place because I wanted him to hook me up with Robert Smith and have him produce my record. But he never answered. Ross reached out saying, "I'll help you with your record." Two days later, we started recording. The direction I was taking was very clear even in the way the songs were written—very raw, more dreamy, more punk-y, more goth-y, more fun, more epic. Ross is the master at capturing the most vibrant, vital, vulnerable vibe […] We recorded at his house in Venice beach, would go to yoga in the morning together and then just record all day every day for a good six months of fun. Now I consider him family.

Outside of music, you’re a highly talented actor having starred in multiple French films as well as a voice over in the Oscar-nominated film Her. Currently living in Southern California, are there any ambitions in pursuing an acting career after supporting the upcoming album release?
I do love acting and miss it ‘cause I've been so rich with music the past few years. I actually have five movies booked for 2015. I hope I have time to do it all. I'm really nervous about it. But I have a good team that is watching out for me and is good at making things happen.

You’re highly versatile across multiple platforms, including on-stage live performances or cinematic deliveries. Having directed several music videos of your own, is there a platform where you feel most comfortable? Is maintaining a creative stance the priority objective?
Yes. If I don't feel creative or don't challenge myself with new creative endeavors, I just get bored. There's one thing in life I can't stand: being bored. So, I always keep myself busy with a million creative outlets. Directing my music videos is definitely some of my favorite little side things to do. I'm directing two new ones. Very excited about that.

Recently, you debuted the song “Bad Poetry” into your set list in Orlando. The upbeat tempo and melodic dance beats provide an energetic volt that captivates the audience. Could this be considered a speck of light into the direction the unreleased album is headed?
Hahaha! How do you even knooooowwww?  Yes indeed, I’ve been laying a lot of songs out of the new record on this tour. It's been really fun to play them live. And “Bad Poetry” definitely reflects the new sort of dreamy vibe of the record.

The music industry has struggled to maintain a profit with album sales over the past decade. Artists have independently released their work free of charge while others have partnered with major companies. Can you see a future where music content becomes an open platform in the future? What are your thoughts on tomorrow’s musical approach, and is it salvageable from a monetary standpoint?
I seriously have no clue.  All I know is that I made a record and want people to hear it. I don't care how they do it. It's really hard to survive as an indie musician making "just" music today. I lose money each time I go on tour. I have to DJ and continue acting to make sure I can still do music. All of this is giving me MAJOR anxiety.

The viral video “First Kiss” was released earlier this year and is closely approaching 100 million views. You participated as one of the 20 people to appear on camera kissing a stranger and shared your song “We Might Be Dead Tomorrow” onscreen. How did this idea flourish? Were you approached, or was this a project you wanted to be a part of?
I was approached by my friend Melissa Cocker who was planning the video for her brand Wren (that I love) and she just asked me, "Wanna be a part of this?" I had no idea what it really was and just said yes, and then all of this happened and it ended up being the most unpredictable amazing experience.

The creative accolades you’ve accomplished under the age of 30 are definitely something to be proud about. Outside of the already mention creative mediums you’ve ventured on, is there any other form of expression you would like to address?
Ha! Thanks. I'm pretty happy with everything I've got to do so far. I do so much only because I'm so scared to die young that I want to make sure that if I die tomorrow, I'd have accomplished enough stuff that I needed to during my life. Does that make sense? I definitely want to direct a feature film soon enough. I have a few ideas that have been blooming for years.

With the year quickly approaching the end, what can fans expect from you in 2015? Any current details that you can share?
My record will be release early next year, and hopefully I'll get to tour as much as possible and do a bunch of movies too!