Must-See Movies that are Under the Radar or Overlooked 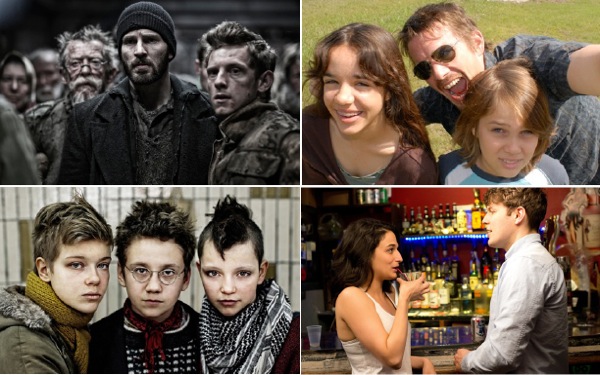 These are not uncommon lines of everyday dialogue at this time of year, whether you’re in the film business or not. But really the question being asked is “How’s Interstellar?” Or “Which is better, Birdman or Foxcatcher?”

If you respond by mentioning films like the operatic period drama The Immigrant or the cerebral, abstracted sci-fi of Under The Skin or the warm teenage Swedish punk-rock coming-of-age story We Are the Best! you are met by pretty quizzical stares, as if you somehow misheard the question. Because the underlying subject of these questions is which of the year-end prestige releases, with all their signifiers of quality and waves of hype pulled along by the tides of awards season, should be “in the conversation” right now.

Among the many anomalies that make the 12-years-in-the-making Boyhood such a genuinely unique object is that it is a movie released in July that many people still seem interested in talking about now that it’s November.

Maybe it’s obvious to say so, but the movie year is, just like a regular one, 12 months long. There’s no need to truncate what gets remembered and celebrated and just plain seen because of the sometimes-arbitrary realities of release dates.

Would James Gray’s The Immigrant — with powerful performances by Marion Cotillard, Joaquin Phoenix and Jeremy Renner, set in New York City in 1920s — be more in the conversation (or have done better business) if it were released in the second half of the year and not the first? The movie is the movie regardless — and it’s great.

And all of this is not even to make the case that any of these films from earlier this year are necessarily the best of 2014 — seriously, I for one cannot get my brain around year-end best-of lists just yet. But they certainly deserve to be remembered or at the very least not forgotten. Anyone who says this has been a weak year or that there isn’t anything exciting happening in cinema right now has simply been watching the wrong movies.

The dynamic performances by Tessa Thompson and Teyonah Parris in Dear White People will likely send one rushing to look up their credits online, only to discover they each have a long list of previous credits. You have likely seen them both before but never taken notice of them in quite this way. Both Jenny Slate in Obvious Child and Gugu Mbatha-Raw in Belle turned in exhilarating performances that jumped off the screen in roles they were seemingly born to play.

Emily Blunt similarly grabbed a movie with both hands and made it all her own with her performance in Edge of Tomorrow, apparently retitled with its advertising tagline “Live Die Repeat” for post-theatrical platforms. It seems odd to talk about a big-budget sci-fi Tom Cruise movie as underseen, but that’s apparently the world we live in now.

Listen Up Philip is an examination of ego and ambition in a young male writer played by Jason Schwartzman, yet the story also pays close attention to the emotional life of his girlfriend, played by Elisabeth Moss. (Who was also great this year in the inside-out relationship comedy The One I Love, a subset of the subset of underappreciated movies.) In what is simply one of the year’s finest moments of screen acting, the camera in “Philip” holds on Moss after a breakup and the cascading series of emotions silently moving across her face, from wounded defeat to hopeful elation, is a marvel to witness and not to be missed.

Perhaps not surprisingly, the grand dame/patron saint of the overlooked/not-to-be-missed movie this year is Tilda Swinton, who appeared in Snowpiercer, The Grand Budapest Hotel and Only Lovers Left Alive. All three roles, respectively as a dystopian political functionary, a willful, bawdy dowager, and a bohemian vampire, are playful and witty and reveal themselves to have emotional depths that might not be apparent on first glance.

For myself, my mind often turns back to Philippe Garrel’s Jealousy, an intimate drama about a couple starring Anna Mouglalis and the filmmaker’s son, Louis Garrel. The film is haunting, a spare black-and-white elegy for the naivete of early romance and the difficult realities of making it work. Like the works of Antonioni, I find that Philippe Garrel is a filmmaker I am maturing into, his films revealing their layers to me over time.

And then of course there is the year’s most inspiring film, the documentary Jodorowsky’s Dune, about how the failure of cult filmmaker Alejandro Jodorowsky to realize his Hollywood adaptation of Frank Herbert’s sci-fi novel Dune in the 1970s was in fact no failure at all but rather another a path to a different kind of success. While interviewing the 85-year-old Jodorowsky this year, he gave me a Tarot reading over the phone from Paris, a personal and professional highlight. Do I remember the movie more fondly because of that? Perhaps? Does it really matter? Perhaps not.

Once you start looking, the overlooked start revealing themselves, like woodland creatures emerging from their natural camouflage. There’s the wild Indonesian action film-slash-crime-drama The Raid 2, or the pair of performances by Jesse Eisenberg in Night Moves and The Double, each unnerving in a different way. Then there is the quiet, crystalline beauty and dry humor of Pawel Palikowski’s Ida.

Cold In July is a crime thriller so unassuming in its low-key pleasures that I keep needing to remind myself about it and then wonder how I could forget a movie smart enough to pair Sam Shepard and Don Johnson. And, of course, leering in the corner like some creepy random at a party is Lars von Trier’s Nymphomaniac in all its various volumes. It’s a movie that’s either brilliant or dumb, most likely thrillingly both.

Many of these forget-me-not films are already available on home video and video-on-demand platforms, so it’s possible to see them now even if you missed them earlier in the year. It’s a frequent saying — or at least something I find myself saying to myself a lot — that there are too many movies. But the unspoken modifier is that there are too many good movies, and so it is always easy to feel that you’ve fallen behind.

I’m sure I’m overlooking something myself here too, but don’t you make the same mistake.

So, yes, let this be a plea and a reminder to fellow critics, journalists, compilers of lists, awards voters of all stripes and just anyone who watches movies to look past the current corridor of prestige releases and remember one simple idea: The year is 12 months long.

Special Features
‘There’s going to be no rules’: Hollywood tests new ways of releasing movies in a pandemic
490 views