Haley Joel Osment is All Grown Up in Raunchy Comedy, Sex Ed 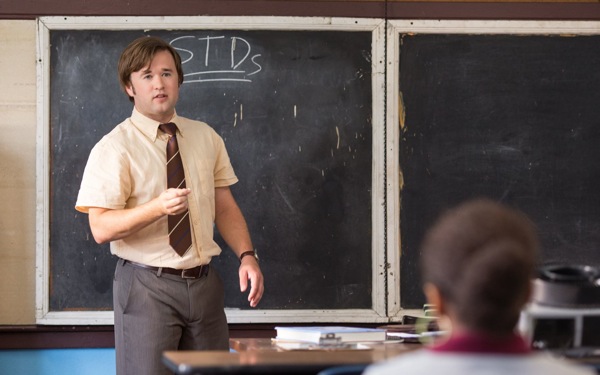 The boy who saw dead people is now the man teaching sex education. We may not have seen it coming, but Haley Joel Osment has grown up to be quite suited to play a virgin educating youths about the birds and the bees. Whether or not Sex Ed is entirely plausible, or really that funny, it brings an assured sincerity and playfulness that’s rather charming.

When Eddie Cole (Osment, The Sixth Sense) finally decides to stop being a pushover and actively pursue his dream of becoming a teacher, he gets a bit more than he bargained for: getting assigned to oversee detention. After hardly even walking through the door, the kids make it apparent to Eddie how dangerously clueless they are about sex. But despite his virginity and complete ineptitude when it comes to his own sex life, he takes it upon himself to do some enlightening.

With the help of a pretty solid cast of characters, including his sage landlord and bartender (Retta, “Parks and Recreation”), his Casanova roommate (Glen Powell, The Dark Knight Rises) and the hopelessly apathetic principal (Matt Walsh, “Veep”), Eddie is able to traverse the awkward waters of middle school sex ed and maybe even get a hot date out of it with one of his student’s older sisters (Lorenza Izzo, The Green Inferno). However, his luck may have run out when one concerned parent gets a whiff of Eddie’s after school program.

Sex Ed basically takes on the same structure as School of Rock: A clueless teacher is given free reign and unexpectedly gets through to the kids, all the while avoiding some authoritative figure seeking to shut him down. But where School of Rock had comedic clout and adept timing, Sex Ed trails one step behind. Missing the punch line or necessary inflection becomes a habit throughout, and while that doesn’t make it entirely unfunny, it does leave an unsatisfied feeling deep down. We know that the opportunity for solid comedy is there, but the combination of both the editing, which needs more finesse, and the timing of the actors themselves make it all fall short.

The major fault lies in the plot, however. Eddie just seems to echo himself a few too many times as he drunkenly proclaims that he wants to be a man and take action, and then constantly failing in his usual awkward way. Every scenario starts to muddle together and become indistinguishable after viewing—but once again, it is still a rather enjoyable viewing experience.

This is director Isaac Feder’s first feature, so perhaps we can forgive the slight faults in Sex Ed’s foundations. The premise’s raunchy nature—it’s definitely not a kids’ movie—glosses over the fact that deep down there is a great message. And, it’s exactly because of that raunchy nature that any high-and-mighty preacher stance is inexistent. Yes, there might be an entirely unnecessary slow clap involved, but hey—maybe out of all things, safe sex is worth clapping about.

But really, Sex Ed isn’t about the kids. It’s about Eddie and his search, not for his manhood, but what the hell “manhood” even means. While it is somewhat shocking to see Osment as an adult, he perfectly embodies Eddie’s struggle. He’s uncomfortable around anyone that exudes any sexuality, but even more so, he’s uncomfortable with his own. And where Osment falls flat comically he makes up for it dramatically, fulfilling the legend of the much-deserved Oscar nom of yesteryear.