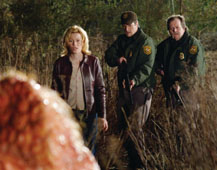 Nathan Fillion is a man of many talents and an actor who, in his last few onscreen projects, has visited quite a few different worlds. As a regular on the last season of "Buffy the Vampire Slayer," he terrorized the fictional, demon-infested town of Sunnydale, Calif. As the renegade Captain Malcolm Reynolds in Joss Whedon’s Serenity, Fillion flew across the galaxy. And now, as Chief of Police Bill Pardy in the up-and-coming horror comedy Slither, Fillion is taking on a whole new world. This time, though, it’s filled with unsightly slugs and other slimy creatures.

The film blends horror and dark comedy and is, as director James Gunn trumpets, a throwback to unique horror flicks like Re-Animator, The Thing and The Fly. A wealthy every-man named Grant Grant (Michael Rooker) is taken over and used as a vessel by a large, otherworldly slug. He must constantly feed on meat to survive, and goes on a rampage through his town to infect its fellow residents. Chief Pardy, then, teams up with Grant’s wife Starla (Elizabeth Banks) to try and stop the impending invasion of these ugly, slimy creatures.

"Bill’s an average Joe thrust into some really extreme circumstances, and he reacts in the same way that I would," says Fillion. "He doesn’t say, ‘Well, it’s time to put on my hero shoes now.’ He just tries to keep his calm, tries to keep it together, but is losing it constantly. He’s just got himself to rely on, so he pushes through. I like that about him."

Gunn, who also wrote the film and is a fan of Whedon’s short-lived television series "Firefly" (which spawned the feature version, Serenity), says he was instantly impressed with Fillion.

"When Nathan came in for the reading, he stole the show. He’s funny, he’s magical, he’s what I imagined for the character. And the audience has to like the hero in order for this dynamic to work," says Gunn. "People don’t want Bill Pardy to get his head ripped off. They care about him; they like him."

Just like his character in Slither, then, Fillion is a pretty likeable guy – even if he’s currently battling an onslaught of slimy slugs. And we’ll all look forward to the world he’ll be visiting next.

Interviews
James Bond producer: 007 ‘can be of any color’ but never a woman
303 views