USC Cannot Afford to Look Past Cal and Toward UCLA 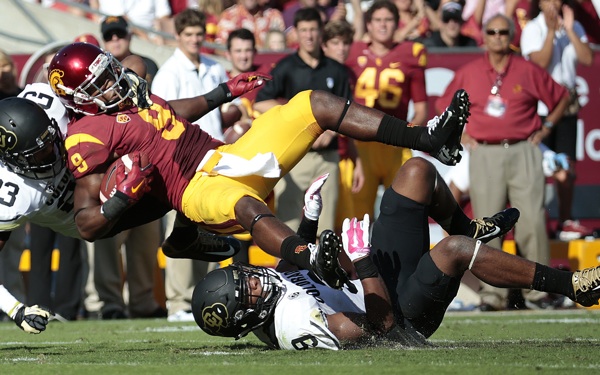 USC finally plays a game Thursday before it plays The Game.

The Trojans host California at 6 p.m. in a dreaded midweek game that is required by the Pacific-12 Conference and USC’s biggest opponent might be distractions provided by students and fans already looking toward the crosstown rivalry with UCLA.

Coach Steve Sarkisian stayed strictly on message this week and even his players parroted his lines when asked about the Bruins.

Sarkisian said he felt no concerns the Trojans’ thoughts prematurely turned to the Bruins, who have a bye and can already focus on their archrivals.

“There shouldn’t be (any players looking ahead),” Sarkisian said. “They give me no indication of that.”

“If we don’t score 35 points we could be in trouble,” Sarkisian said.

The Bears scored 60 points in a victory over Washington State and quarterback Jared Goff, who already passed for 3,119 yards, figures to be unmoved by the Trojans’ secondary.

“Jared’s a beast,” USC linebacker Su’a Cravens said. “We’re not sleeping on him. He can throw the ball. There’s plays when he’s on the opposite hash and throwing an out (pattern pass). Not a lot of quarterbacks are comfortable with that pass.”

What is supposed to make the Bears different this year is they actually play defense. Last year the Trojans led 41-14 at halftime as Cal provided almost no resistance. But it sounds funny saying Cal’s defense is new and improved when it ranks last in total defense and scoring defense, surrendering 39.9 points.

Oh, and that game where the offense scored 60 against Washington State? The Bears allowed 59 points.

Is a shootout enough to inspire fear in the Trojans? USC’s margin of victory in the past five games in the series was 27 points. Most USC players probably barely remember the overtime thriller in 2003 that became Jeff Tedford’s signature victory at Cal.

Whatever the history, USC’s defense does not seem to take the Bears lightly.

Maybe Cal’s best defense against USC will be its offense.

“We can’t give up a bunch of big plays defensively or on special teams,” Cal coach Sonny Dykes said. “They’ve been dynamic on kickoff and punt returns. That’s where it’s going to start for us. Offensively, we’ve got to move the ball and get off to a good start. They can be pretty difficult to move the ball against.”

A side issue tonight is whether cornerback Adoree Jackson gets another chance on offense. Jackson’s spent the past five games solely on defense but practiced briefly this week on offense. Whether he plays offense will be something discussed next week against UCLA, especially with players like Washington’s Shaq Thompson and the Bruins’ Myles Jack successfully playing both ways.

If Jackson does play offense, it would probably be for just one or two plays.

This is the second straight year USC’s hosted a Thursday night game, which the university initially resisted. The Pac-12 requires teams to host midweek games two out of every three years and last year’s game at the Coliseum went smoothly in terms of traffic and congestion on a school day. Tailgating and parking on campus are banned for the game.

But the university is expected to be extra vigilant with off-campus parties. After last year’s victory over Arizona, a Loyola Marymount student was hospitalized after falling from a table at a fraternity party. Eight other students were reportedly hospitalized with alcohol-related health issues.

The fraternity where the accident occurred, Sigma Alpha Epsilon, was recently suspended at USC for three years by it national chapter.