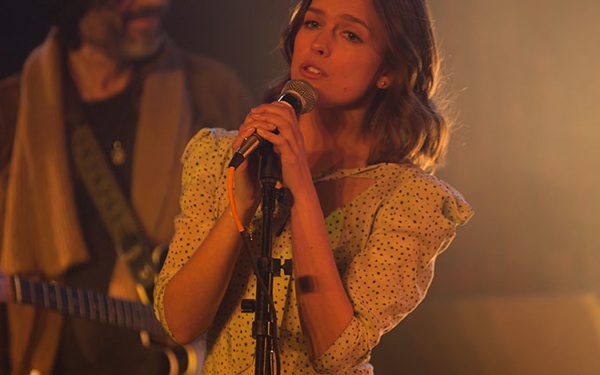 When big city life gets you down, sometimes returning to your simpler, more modest roots is the key to rediscovering happiness. For a singer-songwriter, there’s no better place to do some soul-searching than one of the most musically rich towns in America: Woodstock. Add a little bit of timeworn romance mixed with timeworn plot, and you get director Rita Merson’s first feature, Always Woodstock.

The focus of Merson’s story falls on Catherine (Allison Miller, 17 Again), a wide-eyed and high-strung young professional who works for one of the biggest record labels in the country. All seems good and well until her bosses give her the task of wrangling the label’s superstar. Catherine quickly proves she is the last person for the job, so they fire her. And since life isn’t fair, she comes home jobless only to find her fiancé having an affair with another woman.

Aimless, single and with little inspiration to write those songs swimming in her head, Catherine looks to her past in hopes of reconciling her love for making music. To Woodstock she goes, where she spent her childhood until her parents’ untimely death, and with nothing holding her back except herself.

What she finds in Woodstock is nothing you wouldn’t expect: a town of much more down-to-earth people than herself; a karaoke bar that she obviously must indulge in on her first night; and, of course, a handsome and single doctor named Noah (James Wolk, For a Good Time Call) there to pick her up when she gets too drunk at the bar.

However, this is all expected because we’ve seen this narrative structure before. Always Woodstock is predictable, relying too heavily on the charm of its lead to actually become its own being. The romance, the misunderstandings, the reconciliations—it’s all happened a hundred times over and has been done better.

But speaking of that charming leading lady, Miller really is the key to the film’s brightest moments. She shows possibility that, with a good script and a unique story, maybe she could prove to be a memorable star. And thankfully, she wields a beautiful singing voice that should’ve been utilized even more. Miller clearly has a fresh spirit, ready for someone to take and mold her. But unfortunately, Merson wasn’t that person.

From there on out, there’s not much of substance to work off of. The cast, which does a fine job, especially with veteran Katey Sagal (“Sons of Anarchy”), is lost to a strained script that tries to be quirky and light. From Rumer Willis (The House Bunny) as Catherine’s alternative friend to Jason Ritter (Freddy vs. Jason) as her unabashedly dopey actor boyfriend, a modest amount of talent exists but isn’t tapped into. Top that with cinematography that only brings to mind shows on the USA Network, and Always Woodstock becomes a deflated rom-com.

All the warmth and soul that Woodstock brings to mind becomes muddled and unfocused, raising the question of whether or not Merson truly understands the spirit of the famed festival and the legacy it left behind.

Always Woodstock is currently playing in select theaters and on VOD.