USC is No Longer Top U.S. Spot for International Students 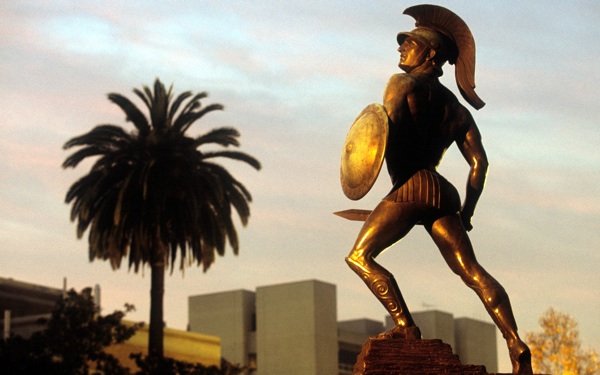 For the first time in 13 years, USC has lost its title as the leader in recruiting lucrative foreign students, according to a new report.

USC enrolled about 10,900 students from outside the country in the last academic year, according to a survey of U.S. colleges conducted by New York nonprofit Institute of International Education, in partnership with the U.S. State Department.

Although that was an increase from the year before, it was still fewer than New York University's 11,100 foreign-born students.

"Both institutions remain hugely attractive to international students, with some preferring the West Coast and the strengths of USC, and others finding NYC and NYU more appealing," said Peggy Blumenthal, the senior counselor to the president for the group.

UCLA ranked sixth in the survey, and UC Berkeley was 18th.

The number of international students in U.S. colleges and universities increased about 8% last year to nearly 886,000. China sent the largest group, with about 274,000 students, more than double the number of students from India, the second biggest group.

Foreign students make up about 4% of all higher-education undergraduates and graduates in the U.S., according to the survey.

More colleges and universities nationwide have come to depend on Chinese students, who generally pay full tuition, as a way to help boost their budgets during tough economic times.

But a recent study by the Council of Graduate Schools, a Washington D.C., nonprofit, found that the number of graduate-school admissions offered to Chinese nationals flattened this year and that applications from those students fell slightly, a sign that fewer Chinese students might be coming to the United States in the future.

This year, however, the number of overall Chinese graduate students rose to nearly 40% of the total, according to the Institute of International Education survey. As recently as a decade ago, the vast majority of Chinese students in the U.S. were taking graduate courses. Since then, the quality of graduation education in China has grown and improved.

China has been able to retain "some of the students who might have gone overseas," said Rajika Bhandari, deputy vice president for research and evaluation at the Institute of International Education.

After two USC Chinese graduate students were murdered two years ago and another killed in the spring, it was unclear whether Chinese enrollment at USC would decline. But in the 2013-14 academic year, that group grew nearly 20% over the previous one, according to USC statistics.

USC, along with other U.S. schools, makes a particular effort to recruit in China and elsewhere in Asia.

California attracted the largest number of foreign students nationwide, with about 111,400, followed by New York and Texas, which had nearly 88,000 and 63,000 international students, respectively.

The number of students from India grew for the first time in three years. The nearly 6% increase was driven by graduate students and reflects a strengthening of the Indian economy, Blumenthal said.

"The growth of the Indian economy and especially the growth of the private sector means that Indians who come back home with a U.S. graduate degree can expect to reap career benefits that justify this investment in time and money," she said.

The University of Illinois at Urbana-Champaign had the third-most international students, with about 10,800. Columbia University ranked fourth, and Purdue University's main campus was fifth.

The number of U.S. students studying abroad grew nearly 2%, although the rate of growth was slower than usual because of the economy, experts said. U.S. officials hope that number increases in the future.

"We also need to expand access to international education for students from more diverse backgrounds, in more diverse locations of study, getting more diverse types of degrees," said Evan M. Ryan, assistant secretary of state for educational and cultural affairs for the State Department.

The most popular destination for U.S. students looking to experience a different culture was the United Kingdom, according to the survey, followed by Italy, Spain and France.