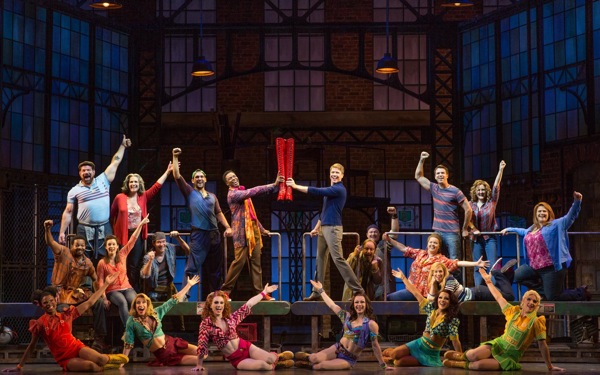 Back in April 2006, Miramax released a little British comedy flaunting a Donna Summer soundtrack and enough fabulous flamboyance to woo American audiences. But sadly, only a handful of Anglophiles here in the States saw the uplifting underdog story starring a then-unknown Joel Edgerton (seen in next month’s Exodus: Gods and Kings) and Oscar nominee Chiwetel Ejiofor (12 Years A Slave).

Among that handful were probably Cyndi Lauper and Harvey Fierstein, who have collaborated to bring their Tony-winning musical adaptation of Boots to audiences across the country. By injecting a fierce energy into the production, Lauper (music and lyrics), Fierstein (book) and director-choreographer Jerry Mitchell have elevated to thrilling new heights the story of Charlie Price (Steven Booth), a likable bloke who inherits his dad’s shoe factory in a working-class burg of the English Midlands and forms an unlikely partnership with a London drag queen named Lola (Kyle Taylor Parker) in order to produce a line of the titular footwear and save the family business in the process.

Parker, a member of the original Broadway cast, dazzles as Lola. From her debut number, the disco-delightful “Land of Lola,” to the show-stopping “Hold Me In Your Heart” (shades of Jennifer Hudson’s rendition of “And I’m Telling You I’m Not Going” from Dreamgirls), Lola is a force to be reckoned with. In fact, Parker’s performance is what really makes the show; every one of his scenes is a guaranteed cracklin’ good time. When he shows up, he’s a spark that ignites every inch of the stage. And it certainly helps that he has some assistance along the way, provided by his entourage of Angels, a troop of high-kicking queens with backup vocals that raise the roof of the Pantages Theater in Hollywood .

Booth, perfectly cast as the ying to Parker’s yang, brings the right amount of small-town charm and boyish ambition to Charlie. It’s an absolute pleasure to watch his arc over the course of both acts. “Soul of a Man” is Booth’s shining climactic moment, a chance to prove his vocal chops after a relatively tame turn in the first act.

However, bringing both actors together for a pair of emotionally charged numbers is what really grounds the familiar story. “Not My Father’s Son” is a welcome breather from the flashy pomp and circumstance, and allows both characters to bare themselves to each other—and us—in a men’s restroom of all places. Lauper’s lyrics will bring a tear to the eyes of anyone with daddy issues, and “Everybody Say Yeah” is an energetic, pump-you-up anthem that will leave theatergoers supercharged for the intermission.

The impressive scenic and costumes designs (from David Rockwell and Gregg Barnes, respectively) is a marvelous mix of the mundane and the super-fabulous, bridging two worlds together with stunning results. By the time you see several gruff-and-tough manly men strut their stuff on a fashion runway in some killer stilettos during the finale, you know “Kinky Boots” has fully established itself as an unabashed crowd-pleaser, complete with its own philosophical nugget of a motto: “Change the world when you change your mind.”