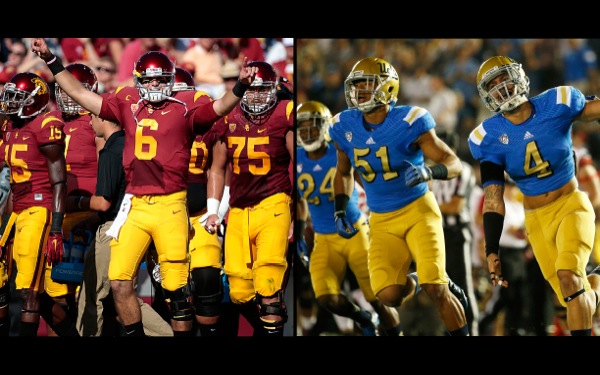 Saturday, Nov. 22, marks the 85th meeting of USC (7-3) and UCLA (8-2) football. Both teams have had disappointing seasons to this point, but there remains a lot on the line this weekend at the Rose Bowl.

UCLA is currently ranked 11th in the AP Top 25 poll at press time and still has a slim chance of qualifying for the inaugural College Football Playoff. If they are able to beat USC and Stanford, their final two opponents of the regular season, and Arizona State takes a loss, UCLA would play Oregon in the Pac-12 Championship game and have an opportunity to show the nation that they deserve one of the four playoff slots. The Bruins would need to have everything break right in order to remain a contender come January, but crazier things have happened in college football.

After consecutive October losses to Utah and Oregon, most predicted UCLA’s season was finished, that they wouldn’t be able to regroup and win the Pac-12. But, four straight victories have put them back in the hunt. Quarterback Brett Hundley has recovered from some early-season inconsistencies and helped right the ship with several weeks of solid play, mostly by becoming more confident in his running ability. Paul Perkins, also, has been one of the premier running backs in the Pac-12 this year and has accumulated more than 1,100 yards with 6 touchdowns.

For the Trojans, this game is more about pride. Typically the dominant football school in Los Angeles, USC has lost to UCLA each of the last two years. This game, and their matchup with Notre Dame to close the season, will be hugely important to building momentum going into next season, when the NCAA sanctions are finally through.

USC has had a very inconsistent year, though.

After starting out strong with a victory over Stanford, they lost to unranked Boston College in their third game, and have since also dropped games to Arizona State and Utah. In Steve Sarkisian’s first season as head coach, the Trojans’ offense has looked incredible, but has repeatedly come up flat in crunch time. His offensive system has definitely helped quarterback Cody Kessler, who has thrown for 29 touchdowns and only 3 interceptions this year – one of the best TD-INT ratios in all of college football. It’s also been a good year for playmakers Nelson Agholor and Javorius “Buck” Allen, who have both accrued over 1,000 yards. USC is the only team in the nation, so far at least, to have both a running back and wide receiver each surpass the 1,000-yard mark.

Unlike the Bruins, the Trojans don’t really have any shot of qualifying for the playoff. The best they can hope for is to end the year ranked as one of the top 10 teams in the country and to play spoiler to UCLA and Notre Dame, their two archrivals. Trojans fans are already locked in on the significance of Saturday’s game against the Bruins, knowing that it’s going to be the biggest game of the season for both teams.

There is a long and storied history of pranks between USC and UCLA during the weeks leading up to their annual matchup. It began in 1941, when USC students stole the Victory Bell – the prize awarded to whichever team wins that year’s Trojans-Bruins football game – from the UCLA campus. Since then, pranks have occurred almost every year, including UCLA students kidnapping USC fans and handcuffing them to fire hydrants, and USC releasing thousands of cardinal-and-gold-painted crickets into a UCLA library. The crux of the prank war, however, has involved the desecration of each school’s famous statue: Tommy Trojan and the Bruin Bear.

At first, fans would simply attempt to dump paint on each other’s statue, but it has become more intense in recent decades. One year, UCLA fans used a blowtorch to steal Tommy Trojan’s sword. Another year, UCLA fans attempted to dump fertilizer on Tommy Trojan from a helicopter, but instead, the helicopter’s propellers sucked it back inside the vessel, covering the would-be pranksters in manure. In recent years, the schools have formed groups responsible for guarding the statues during the week leading up to the football game, and the statues themselves are covered in order to protect them from damage.

But, it appears some USC fans have thwarted the Bruin line of defense this year and were able to spray paint “SC RUNS LA” on the Bruin Bear.

This rivalry, however, goes even further than pranks. At UCLA, the week before the game is known as “Beat ‘SC week”, while at USC the week is called “Conquest,” which is capped off by a huge rally and concert that used to include the incineration of a massive stuffed bear. The USC-UCLA rivalry is one of the oldest in sports, and is special because of their closeness within Los Angeles.

Whereas traditional rivalries such as Auburn-Alabama or Duke-North Carolina are stretched over entire states, the disdain between the Trojans and Bruins is contained to Los Angeles, which serves as home to both schools. This leads to constant declarations that one school or the other is THE school of Los Angeles. This rivalry, though, comes with at least a few ounces of respect, as both schools recognize the other’s athletic and academic achievements. UCLA has the most recognized championships in NCAA history with 111, and USC is close behind in third place. Additionally, UCLA and USC are recognized as two of the premier collegiate institutions in the world, let alone California.

But, any modicums of respect for the other school are put on hiatus for now. This week is about football, and only one can wear the crown.