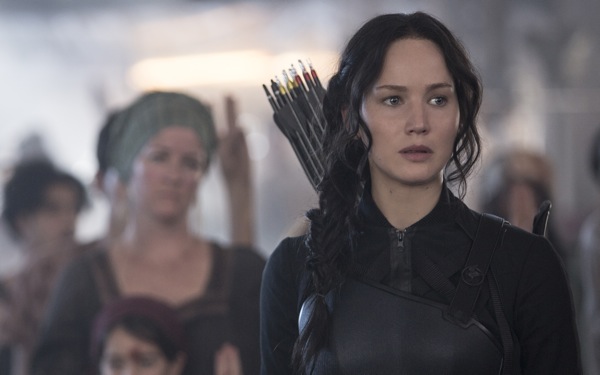 The three Oscar nominations Jennifer Lawrence has picked up were for the deeply dramatic American Hustle, the quirky Silver Linings Playbook and the emotionally powerful Winter’s Bone. Each film came dripping in the trappings — corruption, mental illness, poverty — that scream out for attention from the Academy.

Films like The Hunger Games series aren’t designed to draw attention to acting. They thrive on action and adventure accented with plenty of sentimentality and wrapped up in innocent romance. Lawrence showed in the first two movies in the series that she’s just as comfortable handling grand physical scenes as trading the quiet emotional moments.

The Hunger Games: Mockingjay — Part 1 shows that Lawrence can handle each with a skill years beyond her age. In a film that cranks up the action even more than the first two movies, Lawrence’s work grows even stronger as she commands attention with each word, phrase and breath. Often pressed into dialogue that would have come across as trite and superficial with a lesser actor, Lawrence turns every speech into a personal or patriotic anthem.

Just based on the action, Mockingjay — Part 1 would be entertaining. It’s Lawrence who elevates the movie above the fodder that is this norm in this genre.

The film picks up with Katniss Everdeen (Lawrence) under the protection of the military in District 13. She discovers that President Snow (Donald Sutherland) has been busy putting a spin on the disastrous events of the recent Hunger Games. His main propaganda tool is Peeta (Josh Hutcherson), a move that not only gives him a Games champion to feed out misinformation but also drives an arrow into the heart of Katniss.

District 13’s President Alma Coin (Julianne Moore) wants to use Katniss as her own propaganda tool. Originally cautious about being the symbol for hope, Katniss embraces her place when she sees the destruction and callous devastation Snow has brought to the Districts.

It’s in these moments that Lawrence shines. It’s the rare actor who can show so much rage, hate, pain and hope in a single look. But she does.

And, Lawrence is not alone. Philip Seymour Hoffman turns in another masterful performance that’s a reminder of the great acting work lost with his death. Sutherland continues to grow into the tyrannical role needed to justify the heroic acts of Katniss. Even Elizabeth Banks finally gets to show her true acting skills as her buffoonish Effie Trinket gets stripped down.

Director Francis Lawrence, the man behind The Hunger Games: Catching Fire, continues to show an even-handed approach to both the emotional and big-action scenes. The main thing is that he’s smart enough to boldly display the impressive work Lawrence does from start to mid-finish.

The Hunger Games: Mockingjay — Part 1 has one inherent problem that even Lawrence can’t fix. The finale is presented in two parts, with the wrap-up a year away. This structure leaves the first part lacking as the action comes to an abrupt ending. Movie making is all about the money, but this division of a finale creates a sense of frustration that lingers between the parts.

In this case, it’s even worse because Lawrence is so good and it’s disappointing to have her performance come to and end in Part 1.