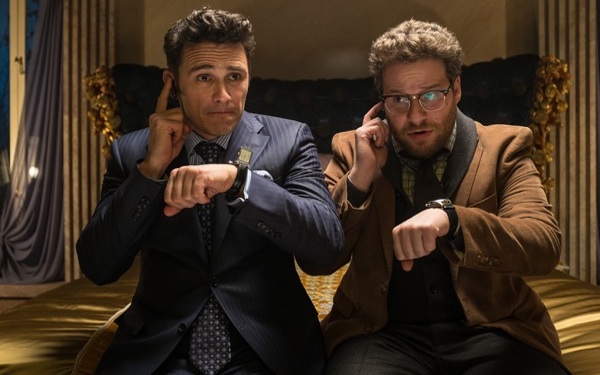 This holiday season prepare for action, comedy, horror and Oscar-worthy movies invading theaters near you!

FRIDAY, NOV. 21
The Hunger Games: Mockingjay – Part 1
Jennifer Lawrence is back in the penultimate entry to one of the most popular and successful franchises ever. Though The Hunger Games movies are imperfect and often suffer from excessive melodrama and predictability, there remains a lot to like here. The series, based on books from Suzanne Collins, serves as an interesting commentary on governmental autonomy and the power of public rebellion. Additionally, Mockingjay will be one of our last opportunities to see the amazing Philip Seymour Hoffman on screen. - RB

WEDNESDAY, NOV. 26
Horrible Bosses 2
Reconnect with characters that had us ROFL three years ago in the first Horrible Bosses! The new sequel seems to follow the first film’s formula, with plenty of laughs throughout. Jason Bateman, Charlie Day and Jason Sudeikis reunite as aspiring CEOs with dreams of creating the “shower buddy,” a device you can take into the shower to wash your body and hair. But when they’re screwed over by a slick investor (Christoph Waltz), they deiced to poorly execute a kidnapping scheme that involves the investor’s son, played by Chris Pine. Speaking of which, Pine (Star Trek) must be given his due credit for taking on this film. Not only does he pull off the pretty-boy charm, but he has comedic chops as well.

FRIDAY, NOV. 28
The Babadook
Books can’t hurt you…right? Maybe not. In this thriller, Amelia (Essie Davis) is at a loss six years after the violent death of her husband. She struggles to discipline her out of control 6-year-old (Noah Wiseman) whose dreams are plagued by a monster he believes is coming to kill them both. When a disturbing storybook called The Babadook turns up at their house, Samuel is convinced it is the creature he's been dreaming about. And when Amelia begins to see glimpses of a sinister presence all around her, it slowly dawns on her that the thing her son has been warning her about may be real. If the trailer is of any indication, expect to be spooked.

The Imitation Game
Along with “Game of Thrones,” “Mad Men” and a few other shows, BBC’s “Sherlock” is considered by many critics to be the best thing on television today. This is largely due to the titular character’s performance by Benedict Cumberbatch, who, in The Imitation Game, plays a famous British mathematician that was instrumental in cracking the code of German communication in WWII. This film tells that true story, and more, leading up to his 1952 trial in the U.K. for the crime of homosexuality. Serving as a war representation, a technology film, a court trial story and a social commentary, there’s definitely a lot to be excited about here. - RB

FRIDAY, DEC. 5
Wild
You might’ve gone backpacking one summer or one semester while studying abroad in Europe, but we doubt you’ve ever contemplated walking 1,000 miles. Starring Reese Witherspoon, Laura Dern, Thomas Sadoski and Gaby Hoffmann, Wild follows the reckless, heroin-addicted Cheryl Strayed (Witherspoon) on the brink of divorce. Haunted by memories of her mother Bobbi (Laura Dern) and with absolutely no experience, she sets out to hike the Pacific Crest Trail all on her own. The film powerfully reveals her terrors and pleasures as she forges ahead on a journey that maddens, strengthens and ultimately heals her. Directed by the same guy who directed Dallas Buyers Club and already receiving rave reviews, Wild surely won’t disappoint.

The Pyramid
It’s been awhile since audiences have been gifted with a good mummy movie since, well, The Mummy in 1999. Thankfully, Fox is brining us The Pyramid. But don’t expect Brendan Fraser’s good looks and sarcasm in this film. Oh no, Grégory Levasseur’s latest project has a much more sinister vibe, which is what you should expect from the writer of The Hills Have Eyes and P2. In this movie, an archaeological team explores a lost pyramid. However, what they find is something insidious.

Miss Julie
Now here’s a romantic matchup we like: Jessica Chastain and Colin Farrell star in a new film that’s all about power, dominance, seduction and repulsion (no, it’s not Fifty Shades of Grey). It’s called Miss Julie. Set in the Irish countryside in the 1880s, the film takes place over the course of one midsummer night where Miss Julie (Chastain) and John (Farrell), her father's valet, dance, drink, charm and manipulate each other. Their intimacy eventually leads to desperate plans and vision of a life together, and Julie and John find their escape in a final act as sublime and horrific as anything in Greek tragedy.

FRIDAY, DEC. 12
Exodus: Gods and Kings
As we’ve seen with Noah, biblical films can be pretty hit or miss. But when you’ve got Ridley Scott (Alien, Gladiator, Hannibal) as the director, you really don’t have anything to worry about. Plus, the star-studded cast—Christian Bale, Aaron Paul and Sigourney Weaver—pretty much ensures you’ll be seeing a strong theatrical performance. Exodus: Gods and Kings is Moses’ story of setting 600,000 slaves free from Pharaoh Ramses. If you’re unfamiliar with the biblical story, recall the animated hit The Prince of Egypt but with real-life actors, probably more special effects and no Whitney Houston/Mariah Carey mash-up.

Top Five
Funny-man Chris Rock is the writer/director/star of this upcoming comedy! Rock plays a wildly successful comedian (hmm, semi-auto-biographical maybe? Or perhaps his alter ego?) that suddenly doesn’t “feel funny anymore.” It’s like he’s having a celebrity mid-life crisis. So, he spends the day with a journalist from the Times and reflects on his life. At the Toronto Film Fest, Top Five impressed the critics (it’s a “ferociously funny snapshot of life in the celebrity bubble,” declared Variety). Along with Rock, the film’s impressive lineup also includes Rosario Dawson, Kevin Hart, Whoopi Goldberg, Gabrielle Union, Cedric the Entertainer and whole bunch of other comedy favorites!

Free the Nipple
Did you know that in 35 states it is illegal for a woman to be topless? And in New York City, which legalized public toplessness in 1992, police continue to arrest women who choose to expose their chests? Yep, it’s true. Free the Nipple is a movement that has gained support from women everywhere, including celebs like Miley Cyrus and Lena Dunham. Inspired by true events, the film follows a group of women as they try to change the censorship laws in America by walking in NYC topless. (Warning: Contains nudity, obviously).

Inherent Vice
Paul Thomas Anderson is among the best directors working today. From Boogie Nights and Punch-Drunk Love to The Master and There Will Be Blood, over the past few decades Anderson has proved himself a visionary when it comes to creating thought-provoking films that challenge viewers’ expectations and sensibilities. The plot for his newest film is so weird – a drug-filled Los Angeles convergence of surfers, hustlers, dentists, murderers, police and a saxophone player – that it doesn’t even really matter. PTA films aren’t about what happens on screen; they’re about giving the viewers an experience that sticks with them, sometimes making them examine different aspects of their life through a new lens. Inherent Vice stars Joaquin Phoenix and is based on a book from Thomas Pynchon, who wrote the screenplay alongside Anderson. - RB

WEDNESDAY, DEC. 17
The Hobbit: The Battle of the Five Armies
The legend of Bilbo Baggins and the Company of Dwarves continues with the third installment based off the popular J.R.R. Tolkien novels. Picking up where the prequel left off—with the evil dragon Smaug on the loose—The Battle of the Five Armies has been described as the saga’s “defining chapter.” While Smaug is unleashing his fiery wrath, the Orcs are ready to attack. The only question: Will the dwarves, elves and men unite against the evil forces…or will they fall? Expect award-worthy special effects, action and a lot of fighting.

FRIDAY, DEC. 19
Annie
Music, dancing, singing, Jamie Foxx and Cameron Diaz – what else do you really need to know? Annie has always been a holiday classic on stage and on screen, and this latest adaptation with a modern twist promises to tug at your heartstrings, much thanks to the adorable Quvenzhané Wallis.

Mr. Turner
How many artists would strap themselves to a ship’s mast just so they could paint a snowstorm? Not many, we’re assuming. But, Mr. Turner did. This film explores the last quarter century of the great if eccentric British painter J.M.W. Turner  (Timothy Spall, Harry Potter and the Prisoner of Azkaban). Profoundly affected by the death of his father, loved by a housekeeper he takes for granted and occasionally exploits sexually, he forms a close relationship with a seaside landlady with whom he eventually lives incognito in Chelsea, where he dies.

FRIDAY, DEC.  25
Into the Woods
You’re never too old for a good fairytale, and this one has all the makings of a great story. Disney has rolled some of our favorite fairytales—Cinderella, Little Red Riding Hood, Jack & The Beanstalk, Rapunzel—into one to give us Into the Woods. Starring Meryl Streep, Johnny Depp, Anna Kendrick and Chris Pine, this musical follows the various characters on their adventures. Little do they know they’re also learning very important lessons from a sneaky, singing witch (Streep).

The Interview
Three words: Seth Rogen, James Franco and Kim Jong-un. Already this is sounds like a brilliant comedy.  Rogen and Franco reunite once again to play a producer and anchor for a celebrity TV show who snag an interview with North Korean leader Jong-un (not played by the real Jong-un for obvious reasons). However, there’s a catch: the CIA wants the men to assassinate the unpopular leader. The movie was pushed back from October to Christmas Day, which we don’t have a problem with whatsoever—can you think of a better gift? News of The Interview initially pissed off North Korea (understandably), and a foreign ministry spokesman for the country reportedly called the move “a blatant act of terrorism and war.” A movie that causes this much international controversy is, without a doubt, a must-see.

Selma
Finally, the Martin Luther King Jr. biopic we’ve been waiting for! Selma will have a limited release on Christmas Day but will expand on Jan. 9. Oprah Winfrey produced and stars in this film about the King’s campaign to secure equal voting rights in 1965. If you recall what you learned in U.S. History, the march from Selma to Montgomery resulted in President Johnson signing the Voting Rights Act of 1965. Selma screened at the AFI Fest, and critics from various outlets have called it stunning, emotional and intelligent, and it’s already getting Oscar buzz.