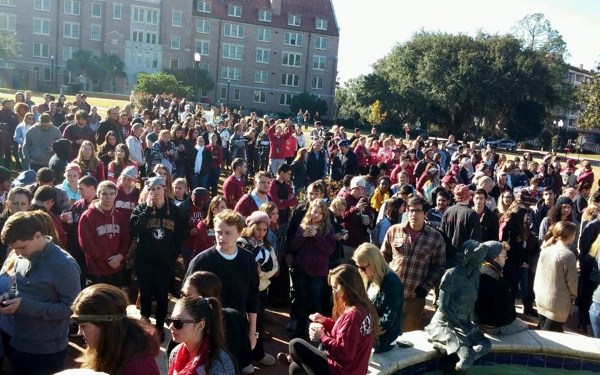 TALLAHASSEE, Fla. — A gunman shattered the calm of a crowded Florida State University library early Thursday morning, wounding three people, one critically, before he was shot and killed by campus police, authorities said.

The gunman, who has not been identified, walked inside the entrance to FSU’s Strozier Library about 12:30 a.m. and opened fire, Tallahassee Police Department spokesman David Northway told reporters at the scene.

Three victims were all students. Hospital officials say one of the students is in critical condition, the other is fair. A third student was “grazed” by a bullet, treated and released at the scene, Northway said. Their names have not been released.

FSU campus police confronted the gunman just outside the library building and ordered him to drop his weapon, Northway said. The gunman ignored the command and fired at least one shot at police officers. FSU police then shot and killed him.

FSU President John Thrasher said in a statement that the shooting was an “isolated incident” and Northway said police “have no other indications to show there is a threat at this time.”

“The Florida State University community is extremely saddened by the shootings,” Thrasher said in a statement. “We are increasing security measures and providing a strong law enforcement presence on and around campus today.”

Tallahassee police are handling the investigation. They have blocked entrance to the building and crime scene, are interviewing students who witnessed the shooting and are asking anyone with information about the shooter to come forward with information. They would not identify him nor say if he was a student or not.

The university canceled all classes Thursday and the library remains closed as police have closed off the building and much of the adjacent Landis Green as they conduct forensics tests at the scene.

About 400 students were studying in the five-story library when the shooting occurred and word traveled quickly as soon as the gunman was spotted, said FSU Police Chief David Perry.

Students are trained to “run, hide or fight,” Perry said, and some students “took shelter” under tables, other left the building quickly leaving their computers, backpacks, keys and in some cases shoes.

Perry attempted to reassure families of students, saying “there is no concern for safety anywhere on campus.”

Witnesses described the scene inside the five-story library building as chaotic as students scrambled for safety in the freezing temperatures and nearly three dozen police officers surrounded the area. Police said some students were evacuated to an adjacent building.

An announcement was broadcast over the library intercom system and recorded by a student cellphone video, as reported by Fox Tampa Bay:

“There has been a shooting in the library. Stay where you are. We will be coming to each floor clearing, and taking care of anybody,” the voice said. “If anybody has a victim; if anybody has a shot, call 911 with your cell phone. If you have not been shot, or you don’t know if someone was armed, do not call 911,” the instructions continued.

Students who were inside the library at the time of the shooting told the Miami Herald they heard about five to seven rapid-fire gun shots after hearing the first burst of gunfire. Police said they could not confirm how many shots had been fired by the gunman.

Allison Kope, 18, of Cocoa Beach, Fla., said she heard a loud sound “like a bookcase falling” and later heard someone say “there’s a gunman.”

She said students then started filing out the doors of the library to go outside, triggering a fire alarm. Once outside, she said she heard several rapid-fire gun shots.

John Ehab, a sophomore from Tampa, told The Associated Press that he was on the library’s third floor when he heard multiple gunshots.

“Everyone heard them,” he said. People took cover in the book aisles to hide from the gunman in case he came onto the floor, Ehab said.

Stephen Moring, 18, of Miami, said he was studying on the first floor, but didn’t hear the first shots because he had earphones. After his friend alerted him to the possible gunman, he saw “a guy lying on the floor grabbing his leg and somebody yelled ‘gun in the building.’”

“We all started heading out the door,” Moring said. “I wouldn’t say we were panicked, but it was a state of confusion.”

“It’s the most scared I’ve ever been in my life,” he said. “It was horrifying.”

At 4:14 a.m., FSU officials sent an alert that the campus was secured and out of danger. They also plan to offer counseling to students on Thursday.