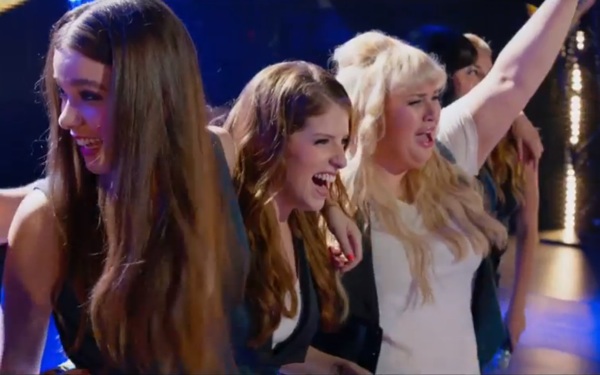 The long-awaited trailer for Universal's sequel to the 2012 hit aca-awesome musical film Pitch Perfect is finally here, and it's hitting all the right notes!

The whole gang is back--including Beca (Ann Kendrick), Fat Amy (Rebel Wilson), Chloe (Brittany Snow) and more--and they sound better than ever. The trailer starts off with the Barden Bellas singing a slow rendition of "Cups" around a campfire and then jumps to scenes of the ladies having a pillow fight during a sleepover. The girl bonding is just too cute.

However, we quickly get down to business. Now that the girls are national champs, they're ready to see if they have what it takes to be WORLD champs! But it looks like they have their work cut out for them: An American team has never won the competition, and their foes this time around include a really tall, bitchy European-looking girl who doesn't "speak loser," whatever that means.

It's unclear from the trailer if the guys (Skylar Astin, Adam DeVine, etc.) from the first film will be competing in the world competition too, but they do make an appearance.