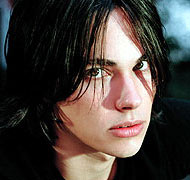 "Can you fill this up with unleaded gas?" Ben Jelen repeats his question a couple of times, trying to catch the ear of a service station attendant. Jelen is used to such pit stops, having just completed a tour with Hanson to promote his debut release for Maverick, Give It All Away. But today the young singer-songwriter isn’t on a tour bus — he simply needs some petrol for his camping stove. Jelen has a little free time before embarking on his next tour (with "American Idol" runner-up, Clay Aiken) and is literally heading for the hills for some recreation.

"I love it," says Jelen. "I’m usually in cities and urban areas, so to get out and actually see trees is wonderful for me. I’m about to go do six days on the Appalachian Trail. I’m really looking forward to it."

For Jelen (pronounced "Yellin"), inhaling clean mountain air on his day off is completely apropos of what he has given his fans — the fresh breeze of his unique music and composing style. Although he’s a multi-instrumentalist, Jelen favors the piano and uses lots of orchestration to back up his intelligent lyrics, creating an aura of sophistication without putting on airs. The musician is well traveled and credits his many experiences as an influence on his music.

"I was born in Scotland, then the family moved to England," explains Jelen. "Then we moved to Texas and then to New Jersey. My dad is a doctor and has kind of a travel bug. I ended up staying here in New York, getting my degree in biology from Rutgers University while the family went back to England.

"I think there are plusses and minuses to staying in one place as opposed to moving," continues Jelen, "but when you move around, I think you definitely get a sense of perspective on things. There’s no doubt that that’s carried over a little into the songs."

While not discernable in his singing, Jelen’s speaking voice retains more than a wee bit of Scottish accent despite his immersion in the Big Apple. The lilt adds exotica to a musician who couldn’t be more down to earth. In fact, Jelen chose to spend his twenty-fifth birthday partying with fans at Club Sea World, where he also made some new friends of the flippered kind.

"I got to meet all the killer whales and feed them," says Jelen with a smile. "The dolphins and the Beluga whales — it’s just magnificent to be so close to those animals. They’re extraordinary." Jelen waxes philosophical about the event, adding, "It’s a privilege to be that close to them; I don’t think people were ever supposed to see them in that capacity."

Jelen is a fervent supporter of the National Resources Defense Council, an advocate for a myriad of environmental causes. He says he was happy to give the organization part of the money from his publishing deal. "There’s so many places that they’re trying to protect, but really with policy. You have these laws, but no one really upholds them. So when they see laws being broken, they go in and they litigate or take other actions to hold these people responsible for polluting the air, or the woods, or whatever else. I think it’s really important."

Jelen’s organic lifestyle may take a turn at fantasy in the near future having recently been offered a guest spot on the TV show "Smallville." "They might have me play The Flash," Jelen says with a laugh. "I don’t consider myself an actor at all, and definitely not a natural one. I still have to go in and read lines. It’ll be interesting."

Give It All Away is currently available.