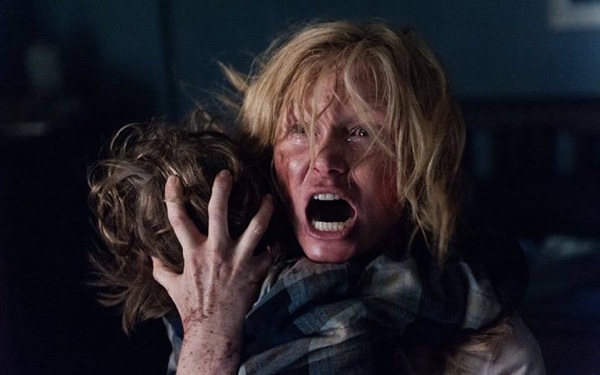 When something goes “thump” in the night, all you can do is pray that’s all it wants to do. When it’s The Babadook doing the thumping, however, you might as well get ready to thump right back.

For director Jennifer Kent’s first feature, she brought an unmistakably simple yet engulfing horror film to an otherwise swamped-down genre. In all of its straightforwardness, there still lies a great amount of artistic beauty and quality that awards the flick a unique stamp of approval.

The Babadook is a chilling story about Amelia (Essie Davis, The Matrix Revolution) coping with the tragic death of her husband and how it has affected the heartbeat of her family. Despite having died years ago, the pain and consequence of his death still weighs heavily over her and her son Samuel (Noah Wiseman), like a cloud too stubborn to scatter. But it’s when Amelia reads Samuel a sinister book called The Babadook, which appeared suddenly on his shelf, that everything seems to go awry. At first, it seems Samuel’s imagination gets the best of him as he continues to act out, but quickly both mother and son realize this is no figment of a young boy’s imagination—the Babadook is real and has come to claim them.

Kent then takes our hand and guides us through the dark and dusty hallways of Amelia’s house. We watch voyeuristically as she slowly loses her sanity and becomes more and more susceptible to The Babadook’s hauntings. As the book reads, the more you deny its existence, the stronger it gets, and what mother wouldn’t do everything in her power to deny the thing that seeks to harm her son? This is a major reason why The Babadook succeeds on such a basic level, especially as a horror film; Kent fills every shadowy nook and corner with doubt and uncertain doom. Where other filmmakers may aim to shock, she fills you with dread.

There are a couple of moments sprinkled here and there where the physical presence of the Babadook seems more comical than Kent perhaps aimed for. Some viewers may also discount the plot, because there seems to be little to no motivation for all of these terrible things happening to this grieving family. But, that ends up increasing the viewer's sense of total powerlessness. No matter what you do or have done, the Babadook will come for you.

The film's success can also be attributed to its wonderful arrangement of cast and crew. Any movie seeking to horrify must nab a lead actor who can steer the entire film, through both drama and terror. Kent found the perfect mother in Davis, a woman who seamlessly evokes hopelessness. In her interactions with Wiseman, both actors seem to be breathing the world that Kent created for them. The two of them tango around in each other’s constantly shifting fears, and because of the tangible bond they’ve threaded together as mother and son, watching them fight the evils that be becomes a simultaneously nerve-racking and endearing experience.

Mix all of that with the lightweight script and cinematographer Radek Ladczuk’s richly minimal and voyeuristic world, and suddenly The Babadook looks and feels like our biggest fears. Home is only home until something comes thumping in the night. Then you know you’re not alone, and home is only an illusion.

The Babadook will open in Los Angeles on Friday, Nov. 28, 2014 at the CineFamily at the Silent Movie Theater. Click here to purchase tickets!

William Friedkin (The Exorcist) will introduce the 11:45 p.m. screening of The Babadook on Saturday, Dec. 6 at the Vista Theater located at 4473 Sunset Blvd.