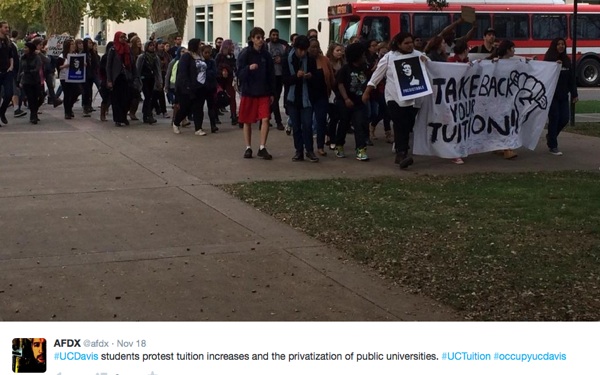 SAN FRANCISCO — Over the din of students chanting their protest, the University of California regents voted 14-7 on Thursday to approve tuition increases of as much as 5 percent for each of the next five years.

The actual voice vote of the regents could not be heard by the public as about 25 students in the meeting room yelled, “Hey, hey, ho, ho, tuition hikes have got to go!”

The vote for the increases sets up months of negotiations and political posturing before a final tuition-percentage increase is chosen. UC officials say the hike can be eliminated or moderated if state funding increases enough.

The long debates that took place Wednesday were not repeated and none of the regents opposed to the matter spoke. Under the plan, tuition could rise to as much as $12,804, not including room and board. By the 2019-20 school year, that could be as high as $15,564 if state funding does not rise more than anticipated.

UC President Janet Napolitano has said that the increases are needed to help with employee pay and pensions, hire more faculty and raise the number of California undergraduates by 5,000 over five years.

After the vote, protesters continued to shout at the regents and the meeting was briefly adjourned until the demonstrators left the room.

But a much calmer atmosphere prevailed than the day before when several hundred student demonstrators tried to block entrances to a UC San Francisco building and got into pushing matches with police. A small group of students picketed outside Thursday and the large glass door that had been shattered the day before was now boarded up with wood.