'Into the Woods' at The Wallis is a Must-See This Holiday Season! 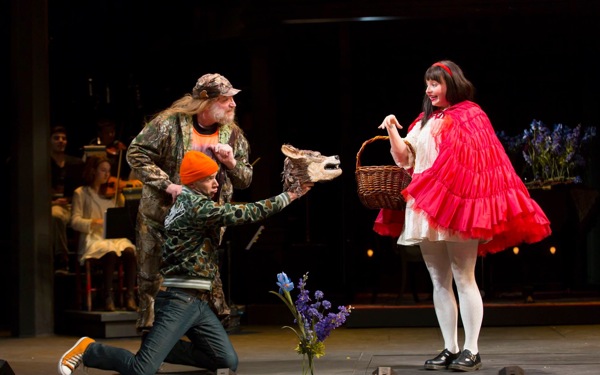 With Disney’s star-studded Into the Woods getting ready to hit theaters Christmas Day, spend the time leading up to the cinematic release by taking a trip to Beverly Hills and watching the Tony Award-winning musical live on stage!

For 24 performances only—Dec. 2 to 21—the Oregon Shakespeare Festival’s critically acclaimed production of “Into the Woods” will be at the Wallis Center for the Performing Arts (aka “The Wallis”). Led by world-renowned artistic director Bill Rauch and director Amanda Dehnert, this production is a holiday treat for theatergoers and fairy tale lovers everywhere.

“This is a fantastic opportunity for The Wallis to introduce new audiences to ‘Into the Woods,’ and to remind seasoned theatergoers why this iconic musical is so beloved,” said interim artistic director of The Wallis, Patricia Wolff.

“Into the Woods,” with music and lyrics by Stephen Sondheim, isn’t your typical fairytale; it’s a modern twist on the classic and slightly darker, un-Disney-like Brother Grimm stories. The play rolls our favorite fairy tales into one, featuring the characters we have grown to love: Cinderella, Little Red Riding Hood, Jack (of beanstalk fame), and the Baker and his Wife. With witches, wolves, giants and mysterious strangers, this musical isn’t so much about the “Happily Ever After.” Instead, the characters discover that wishes come with a price, and some things are more important than a perfect, happy ending.

Over the summer, critics gave this musical rendition positive reviews. "Into the Woods" is a cartoon come to life, writes the Oregonian. The show is tight, and the singing and acting are delightful. If the message is a big heavy-handed, the production keeps things light.

And the Los Angeles Times’ Charles McNulty praised the show for its “musical richness.”

…it was the beauty of the singing that melded the moral and emotional aspects of "Into the Woods" into a seamless vision, he wrote.

With lavish costumes, a 18-member orchestra and a 17-member cast that features Jennie Greenberry (whom McNulty deemed “a star in the making) as Cinderella, Miriam A. Laube as the Witch, Howie Sego as the Wolf and Kjerstine Rose Anderson as Little Red Riding Hood, “Into the Woods” should be high on your Christmas list this holiday season!

See "Into the Woods" at The Wallis from Dec. 2-21. Purchase tickets here!